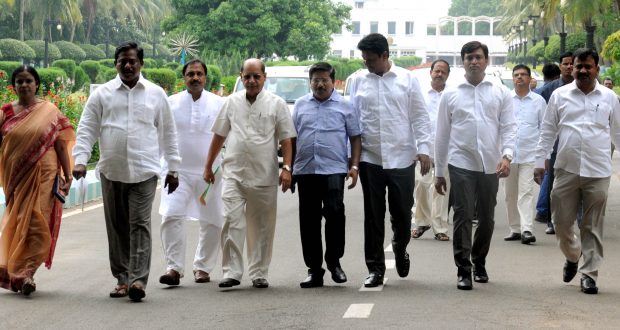 in State News May 31, 2018 Comments Off on BJD submits memorandum to Governor Protesting rise in fuel price 1,276 Views

Bbhubaneswar:31/5/18;Protesting rise in fuel price and negligible relief to consumers in the last couple of days, senior leaders of ruling Biju Janata Dal (BJD) today met the Governor of Odisha and submitted a memorandum to him addressed to the President of India demanding cut on excise duty levied on petrol and diesel by the Central government.

The memorandum stated that over the past four years there has been a drastic increase in prices of petrol and diesel prices which is affecting the lives and livelihood of people across India and particularly in Odisha where all sections of society are severely affected by this phenomenal rise of petroleum prices. “It is unfortunate that the Union government is a mute spectator to this entire price rise and not taking any effective steps to reduce it”, the memorandum stated.

It added that that the party has obtained data and information from the Petroleum Planning and Analysis Cell (PPAC) of the Union Petroleum Ministry. “In 2014 when NDA Government came to power, Petrol was priced at Rs. 71.41 per litre in New Delhi. During that period due to the high international crude oil

prices, this price could not be brought down further but with the fall in international oil prices. The NDA Government has not made any effort to pass on the benefits of cheaper fuel to the masses of India”, the memorandum said.