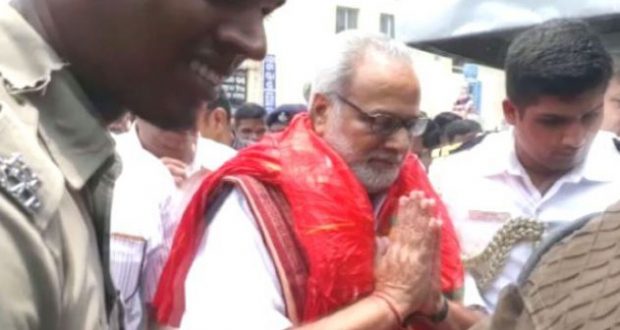 Professor Ganeshi Lal offered prayers in Jagannath temple ahead of taking oath as the Governor of Odisha.

Puri:29/5/18; Professor Ganeshi Lal today visited Puri Srimandir and offered prayers ahead of taking oath as the Governor of Odisha.

He was accompanied by Law Minister Pratap Jena and other government officials.

The newly-appointed Governor was given the guard of honour upon his arrival at the Biju Patnaik International Airport (BPIA) here on Monday.

Lal is scheduled to take oath as the 46th Governor of Odisha at Raj Bhawan in the evening today and officially take the charges from Bihar Governor Satya Pal Malik, who was given additional charges of Odisha.

Notably, Malik was given the additional charge of Odisha Governor since March 21 after Governor S.C Jamir completed his tenure.

A senior BJP leader, Lal was the state president of BJP Haryana unit. He was BJP MLA from Sirsa. He had also served as the Food Supplies Minister of Haryana. Besides, he was the national president of the BJP’s Disciplinary Committee.

2018-05-29
Editor in chief
Previous: India signs Loan Agreement with the World Bank for Strengthening the Public Financial Management in Rajasthan
Next: MCL plans for 1600 MW power plant in Sundergarh