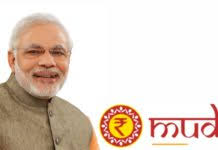 PM interacts with MudraYojana beneficiaries across the country through video bridge

in National May 29, 2018 Comments Off on PM interacts with MudraYojana beneficiaries across the country through video bridge 571 Views

Expressing happiness at being able to interact with the beneficiaries, the Prime Minister said that the Mudra Yojana has become a job multiplier. He further added that the initiative has helped in relieving the entrepreneurs from the vicious cycle of moneylenders and middlemen. It has opened up new opportunities for youth, women and those who wanted to start or expand their businesses.

Under Pradhan Mantri MUDRA Yojana, Government has so fargiven out 12 crore loans worth Rs. 5.75 lakh crore. Out of which 28% of the loans worth Rs. 3.25 lakh crore were given to first time entrepreneurs.Of the total loans disbursed, 74% of the total beneficiaries were women and 55% of the loans were given to SC/ST and OBC communities.Prime Minister, while addressing the PMMY beneficiaries, said that the scheme has transformed the lives of the poor. He said that by aiding small and micro businesses, the scheme has helped to strengthen people economically, socially and has given people a platform to succeed.Emphasizing on creating self-employment, Prime Minister said that being self- employed is a matter of pride now and has helped people in achieving things that were considered impossible before.

During the interaction, Prime Minister said that if Mudra Yojana was implemented a few years ago, it would have helped lakhs of people to set up their own businesses and would have stopped migration to a great extent.Interacting with the Prime Minister, beneficiaries explained how Mudra Yojana has helped to set up their own business and thereby helped to create employment for othersPradhan Mantri MUDRA Yojana (PMMY) is a scheme launched by Prime Minister on April 8, 2015 for providing loans up to Rs. 10 lakh to the non-corporate, non-farm small/micro enterprises. These loans are classified as MUDRA loans under PMMY. These loans are given by Commercial Banks, RRBs, Small Finance Banks, Cooperative Banks, MFIs and NBFCs.