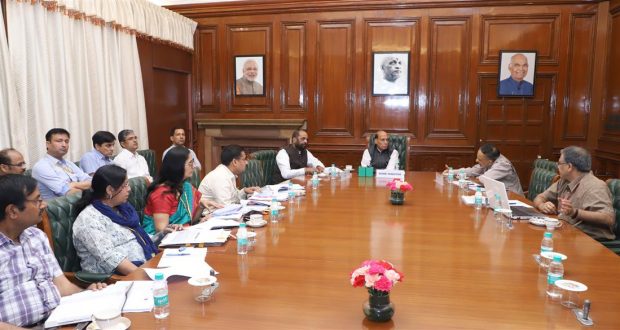 Newdelhi:28/5/18:The Union Home Minister Shri Rajnath Singh reviewed the progress of Department of Jammu and Kashmir Affairs at a high level meeting in the Ministry of Home Affairs here today. The Union Home Minister expressed satisfaction that there has been a significant drop in stone-pelting incidents since the Government announced Suspension of Operations during the Ramzan.

In view of 1,252 ceasefire violations by Pakistan during the current year, the Home Minister called for expediting construction of bunkers along the International Border (IB) and Line of Control (LoC) to protect the border residents. The MHA has approved Rs.415 crores for construction of more than 14,000 bunkers in Kathua, Samba, Jammu, Rajouri and Poonch districts. Work on construction of 1,431 community and more than 13,000 individual bunkers will commence from July.

The Home Minister was informed that compensation to victims of cross-border firing has been approved at NDRF rates and the limit of three milch animals removed for losses incurred upon livestock. The Minister directed that compensation for live-stock may be increased to Rs. 50,000 from Rs. 30,000 presently.

Shri Rajnath Singh directed to expedite the raising of two New Border Battalions of J&K Police. He said the recruitment should be completed by March, 2019. MHA has approved Rs.105 crores in March, 2018. These two battalions would be raised from the people living within 0 – 10 kms of IB/LoC. Besides, 5 India Reserve Battalions (IRB) are also being raised. 4,690 youth have been recruited for this, who will start joining next month. Also, 6,689 SPOs have been appointed out of a total of 10,000 new posts sanctioned. The possibility of filling up of the vacancies of SPOs from Border living community may be explored.

The Home Minister was informed that 1,079 youth have been selected during a Special recruitment drive for CAPFs and Assam Rifles in 2016-17 while 7,302 youth were inducted into the Army during the period 2014-2017.

The Home Minister was also informed about the progress of relief and rehabilitation programmes related to various sections of Migrants and Displaced Persons. 12,763 beneficiaries of Displaced persons of PoJK have been disbursed Rs. 578 crs. Shri Rajnath Singh directed holding special camps and publicity in regional newspapers for disbursing assistance of Rs.5.5 lakhs per family to Displaced People of Pakistan-occupied Jammu and Kashmir and Chhamb, for which MHA has provided Rs.2,000 crores.

Reviewing the Prime Minister’s Development Package worth Rs.80,068 crores, it was informed that nearly 63,000 crores have been sanctioned for 63 projects pertaining to 15 Central Ministries. Out of which more than Rs.24,000 crores (31%) have been released and over Rs.20,000 crores (26%) utilized. 13 projects have been completed/substantially completed. Home Minister directed to accelerate the implementation of these projects.

2018-05-28
Editor in chief
Previous: PM interacts with Ujjwala beneficiaries across the country
Next: Prime Minister meets H. M. Queen Maxima of the Netherlands