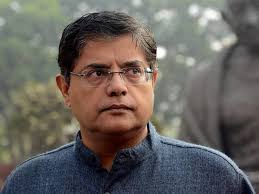 Bhubaneswar:28/5/18′ High-profile Biju Janata Dal MP Baijayant Panda from Kendrapara Lok Sabha constituency today resigned from the party, saying that he has decided to “quit the politics” into which the ruling Odisha party has descended.

The BJD MP was suspended from the party for alleged anti-party activities earlier on January 25.

In January, the Biju Janata Dal had demanded his resignation from the Lok Sabha on moral grounds, alleging that the MP concealed his position in a corporate house while filing affidavit during the 2014 general elections.

The resignation of Panda was very much on the cards considering the fact Chief Minister’s office was in no mood to buy bonhomie and broker truce with ambitious Panda. Following suspension, Panda had sharpened attack on a top a bureaucrat in CMO accusing him of tarnishing the image of chief minister Patnaik.

Panda’s industrial father Banshidhar Panda had passed away recently. Neither the chief minister nor his party colleagues had turned up to pay last respect to the departed soul. And that was last straw in the strained relation between Panda and Naveen.

“I was heartbroken when several BJD colleagues conveyed that they had been restrained from coming by to pay their last respects to the departed soul. That the BJD does not want me anymore, and in fact wants me out, is now irrefutably clear. I have stoically borne many humiliations over the past four years, but this is the last straw, it is now beyond myself respect to continue to be associated with the party in an atmosphere as mean minded as this”, he said in the resignation letter shot off to BJD supremo and chief minister Naveen Patnaik.