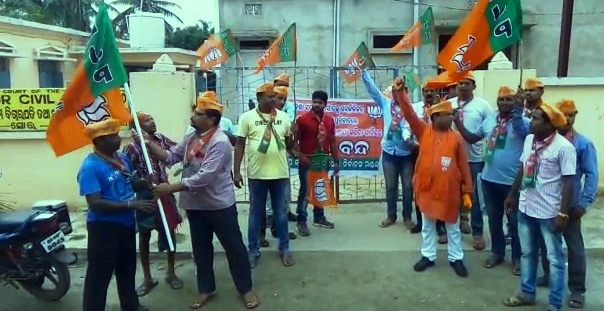 in District Diary May 28, 2018 Comments Off on BJP observes 12-hour bandh in Soro for sub-division status 757 Views

Soro:(Balasore)28/5/18; Normal life has been affected at various places in Soro and Bahanaga blocks of Balasore district today following a 12-hour-hour bandh called by the BJP demanding sub-division status to Soro.

Most government and private offices, shops and other business establishments and educational institutions remained closed during the strike. Movement of vehicles has also been disrupted as the protesters staged road blockades, demonstrations and picketing at several places.

However, national highways and railway stations were exempted from the purview of the strike.

The activists alleged that though Soro town fulfils all the criteria to get a sub-divisional status, the district administration is not granting it the status despite several approaches.

2018-05-28
Editor in chief
Previous: School and Mass Education department signed a MoU with Lend-A-Hand India to enhance the skills of students.
Next: Bus owners’ association increased the fares for all categories of passenger Buses