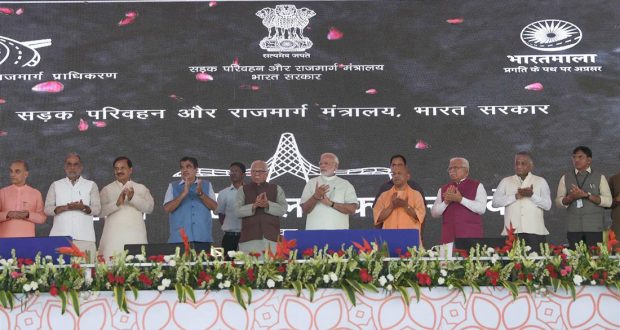 in National May 27, 2018 Comments Off on Prime Minister inaugurates Eastern Peripheral Expressway and Phase-I of Delhi-Meerut Expressway 723 Views

Newdelhi:27/5/18;The Prime Minister, Shri Narendra Modi, on Sunday, dedicated to the nation, two newly built expressways in the Delhi NCR Region. The first of these is the 14 lane, access controlled, Phase-I of the Delhi-Meerut Expressway, stretching from Nizamuddin Bridge to Delhi UP Border. The second project to be dedicated to the nation is the 135 km long Eastern Peripheral Expressway (EPE), stretching from Kundli on NH 1 to Palwal on NH 2.

The Delhi Meerut Expressway, once completed, will significantly reduce travel times from the National Capital to Meerut, and to several other parts of Western Uttar Pradesh and Uttarakhand.

After the inauguration of the Delhi Meerut Expressway, the Prime Minister was greeted by people along the newly constructed road, as he travelled in an open jeep for a few kilometres, inspecting the highway.

The Eastern Peripheral Expressway (EPE), will contribute towards the twin objectives of decongesting and de-polluting the national capital by diverting traffic not destined for Delhi. 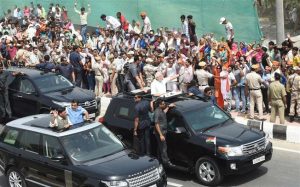 Addressing  a public meeting in Baghpat on the occasion, the Prime Minister expressed confidence that the entire stretch of the Delhi Meerut Expressway would be completed soon. He said the Eastern Peripheral Expressway would help decongest traffic in Delhi. He said modern infrastructure has an important role to play in raising the standard of living of the people. He outlined the steps being taken in building infrastructure, including roads, railways, waterways etc. He gave examples of the increase in pace of infrastructure development.

In the field of women empowerment, the Prime Minister explained how toilets built under Swachh Bharat Mission, and LPG connections under Ujjwala Yojana are making the lives of women easier. He said that out of 13 crore loans given under Mudra Yojana, more than 75 percent have been given to women entrepreneurs.

The Prime Minister also mentioned the steps taken for Scheduled Castes and Other Backward Castes.

The Prime Minister said that in this year’s Union Budget, a provision of 14 lakh crore rupees has been made to strengthen rural and agricultural infrastructure.