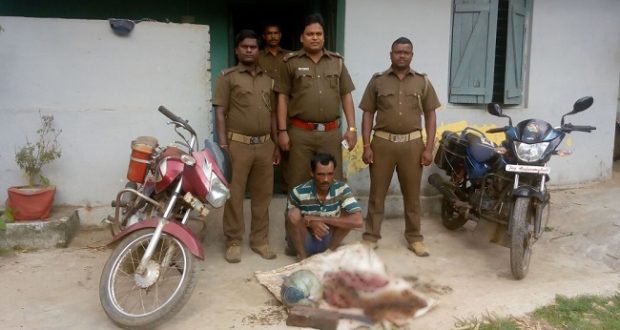 in District Diary May 27, 2018 Comments Off on Poacher Held In Bhitarkanika National Park 1,254 Views

Kendrapara :27/5/18; In the latest wildlife offence, forest officials have made a seizure of deer meat, antler, hides and arrested a poacher today from Pattaparia village close to the Bhitarkanika National Park in Kendrapara district.

Kailash Das (45) was arrested with the raw meat and animal’s hide besides nylon nets used for ensnaring the wild animals. Two motorcycles were also seized from the crime spot. He was a member of a poaching racket active in the area. Three other members of the racket have evaded arrest. They have been identified and search is on to arrest them shortly, said forest officials.

Acting on specific information that poachers had hunted down a spotted deer in the mangrove forest areas within the park, the wildlife offence was cracked, said forest officials.

The accused booked under sections- 9, 27, 29 and 35 of Wildlife Protection Act, 1972 is being forwarded to court. The accused along with his accomplices had spread out nylon nets with loops to ensnare the deer and wild boar. The gang was actively indulged in wildlife poaching activity in recent past. They were adept in the poaching of wild boar and deer species.