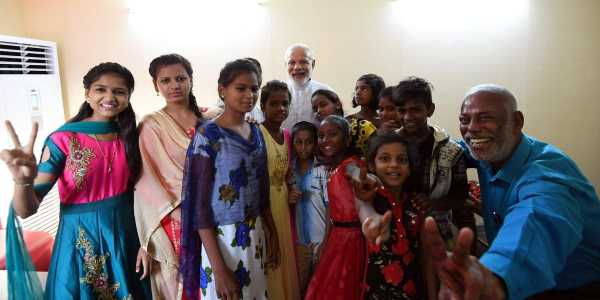 in State News May 27, 2018 Comments Off on Cuttack-based tea vendor D Prakash Rao has once again hit the headlines after Narendra Modi praised him 695 Views

BHUBANESWAR:27/5/18; He is not an ordinary chai-wallah. He is an institution for slum children, an inspiration for all.

Cuttack-based tea vendor D Prakash Rao has once again hit the headlines after Prime Minister Narendra Modi praised him and his activities in the monthly radio programme Mann Ki Baat on Sunday.

A tea vendor for the past five decades, he has given up everything in order to adopt and realise the dreams of others.

He runs a primary school ‘Asha Ashvaasan’ for slum children and spends 50 per cent of his income to bring them to mainstream.

Even at 61, Rao continues to give meaning to the life of many street urchins and slum children left uncared for by offering them free education.

“I congratulate D Prakash Rao for his hard work, his persistence and for providing a new direction to the lives of those poor children attending his school,” Modi said.

The Prime Minister said there are some people who try to bring about a change through their hard work and dedication and make it a reality. Such is the story of Rao.

The lives of more than 70 children are being illuminated through education due to his efforts. He ensures education, health and meals for all the children coming to his school.

“He has banished the darkness from the lives of the slum children. Who amongst us does not know the Vedic shloka – Tamso Ma Jyotirgamaya! However, it has been put into practice by Rao. His life is an inspiration to us, our society and the whole country,” Modi said.

Rao had to endure the pangs of poverty and premature responsibility while growing up. He has been managing his father’s tea stall, the only means of income, since he was seven-year-old. A serial blood donor, he demonstrates the will power than can transform the world.