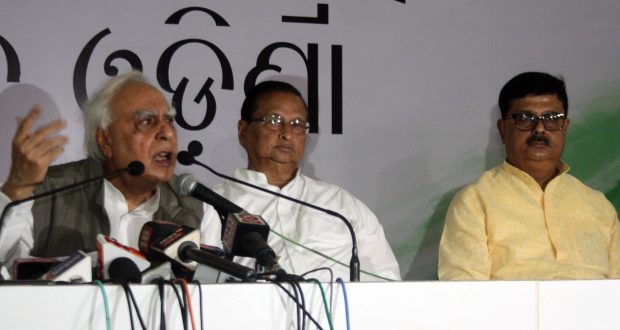 People have now realised that the Modi regime has betrayed them:Kapil Sibal

Bhubaneswar:26/5/18;Hitting out at Prime Minister Narendra Modi for his ‘naamdar’ (dynast) barb, Congress leader Kapil Sibal said the people of the country want the next prime minister to be ‘kaamdar’, ‘jimmedar’ and ‘imandar’ who is not in the habit of making hollow promises.

“People of the country want the next prime minister to be not only ‘kaamdar’ (one who works) but also ‘jimmedar’ (responsible) and ‘imandar’ (honest) who is not a ‘jumlawar’ (one who makes hollow promises),” Sibal told reporters here.

He was referring to the “naamdar” barb by Modi apparently targeted at Congress president Rahul Gandhi during his campaign in the Karnataka Assembly election.

Sibal, who was here to take part in the ‘Vishwasghat Divas’ (Betrayal Day) observed by the Congress, said neither ‘achhe din’ nor ‘sachhe din’ could be experienced in the country as the prime minister had betrayed the people by not fulfilling any of the promises he had made before the 2014 polls.

As part of the ‘Vishwasghat Divas’ observed by the Congress across the country to mark the completion of four years of the Modi government, party workers staged protests here and in the various districts of Odisha.

In Bhubaneswar, the party activists also burnt an effigy of the prime minister.

Claiming that the Modi-led NDA government was working only for the wealthy people and big corporate houses, the senior Congress leader said people have now realised that the Modi regime has betrayed them and ruined the country with its hollow promises.

2018-05-26
Editor in chief
Previous: Noted human rights campaigner Mr. Akhand would join digital security and campaign to be held at Yerevan
Next: Centre tried to resolve the Mahanadi issue, but the Odisha government did not cooperate: Narendra Modi