Top Headlines
Home » National » Centre tried to resolve the Mahanadi issue, but the Odisha government did not cooperate: Narendra Modi 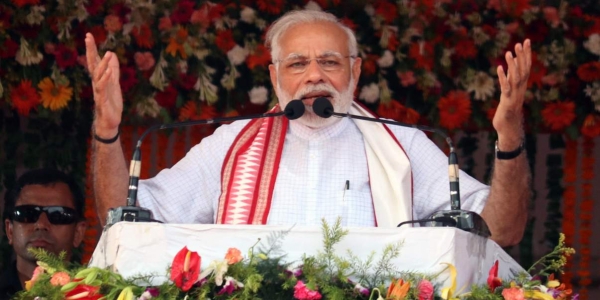 Centre tried to resolve the Mahanadi issue, but the Odisha government did not cooperate: Narendra Modi

in National May 26, 2018 Comments Off on Centre tried to resolve the Mahanadi issue, but the Odisha government did not cooperate: Narendra Modi 581 Views

Cuttack:26/5/18: Prime Minister Narendra Modi on Saturday hit out at the opposition unity saying people involved in the big scam are now coming together to save their family, not to save the country.

Addressing a huge public gathering at Bali Yatra Ground on the bank of river Mahanadi in Cuttack on completion of four years of the BJP-led government at the Centre Modi said, “Our government is running on “janmat” (people’s mandate) and not through “Janpath.”

He said the people of the country are watching how the government is fighting against the black money and corruption. In these four years of rule, now 125 crore Indian believe that the country can change for the best. “Development, good governance is good politics for us,” he said.

Speaking about sanitation, Modi said in 2014 there were 6 crores toilets in the country. However, 7.5 crore toilets have been constructed in the past four years. Besides, remaining 18,000 villages in the country have been electrified. Now four crore households have free electricity.

“Due to our commitment for zero tolerance towards corruption, four former Chief Ministers were arrested and are now behind the bars,” Modi said.

Speaking about law and order situation, Modi said the Naxal menace has come down in the country. The number of Left Wing Extremism (LWE) affected districts has come down from 126 to 90 districts. “Our journey has not ended in four years, we have a long path to cover,” he said.

The Prime Minister further said that President Ram Nath Kovind, Vice President M. Venkaiah Naidu and he himself come from a very humble and poor background.

The Prime Minister also said that in last four years, the investigating agencies have carried out searches at over 3,000 locations and unearthed over Rs 53,000 crore of the undisclosed money.