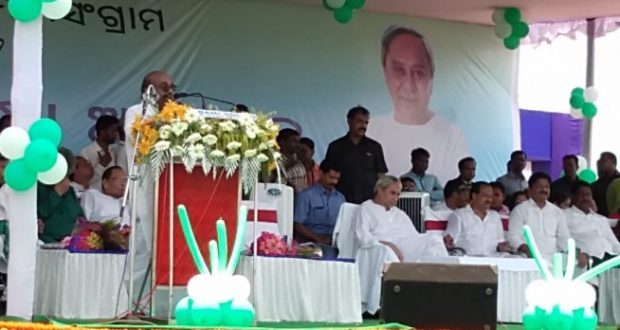 in State News May 25, 2018 Comments Off on Mahanadi Suraksha Abhiyan has become the people’s movement in Odisha:Naveen Patnaik 635 Views

Paradip:25/5/18; Chief Minister Naveen Patnaik on Friday said that the Mahanadi Suraksha Abhiyan has become the people’s movement in Odisha.

Addressing a massive public meeting at Biju Maidan in Paradip on the concluding day of the Mahanadi Sachetanata Suraksha Abhiyan, the chief minister said, “We are not fighting for just water. We are fighting for the life of Mahanadi.”

Naveen said it is grossly unfortunate the BJP government at the Centre has remained silent on such an important issue.

He accused the Odisha BJP leaders of supporting the illegal act of the Chhattisgarh government and shedding crocodile tears before the people of Odisha. “If the BJP leaders have any empathy for Odisha and its people, let them vehemently oppose the illegal act of Chhattisgarh. But can they oppose the BJP government in Chhattisgarh?” Naveen wondered.He also claimed that the BJD government had moved the Supreme Court to redress its grievances on the water dispute and following the apex court’s intervention, the Centre formed the Mahanadi Tribunal.

Thanking the people for covering a distance of 500 km from Jharsuguda and Bargarh district to Paradip in the scorching heat, Naveen said people of Odisha have united for the cause of Mahanadi and will give a fitting reply to those who have posed a threat to their livelihood.