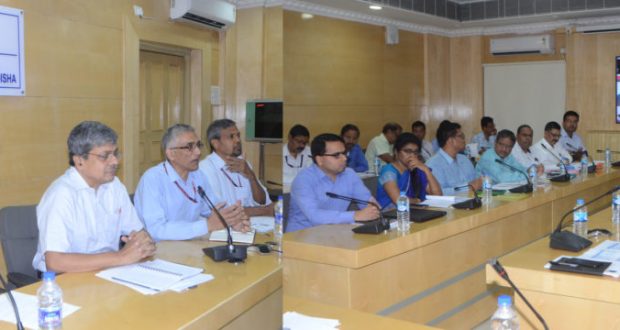 Bhubaneswar:24/5/18; Odisha has made visible progress in construction of household toilets in rural area under Swachh Bhrat Mission (SBM).

As of now the household coverage of toilets has crossed 55% from a mere 10% in the October, 2014.  This was known from the review meeting taken by Chief Secretary Aditya Prasad Padhi along with Secretary Ministry of Drinking Water & Sanitation Government of India Parameswaran Iyer in secretariat conference hall today wherein the Mission Director Roopa Mishra outlined the issues and collectors from respective districts placed the updates for discussion.

Taking a district wise review of the progress Central Secretary Iyer applauded the focus of the districts in behavioral change of the people in SBM campaign.

“Odisha has gathered momentum in the mission campaign and it is right time to push it ahead with more speed”, he said.

Padhi further directed the Collectors that their reports should unambiguously reflect the ground level reality and strict monitoring should be kept place for sustaining the ODF status once it is achieved.

Participating in the discussion, Principal Secretary, Pachnayati Raj Deo Ranjan Kumar Singh said, “sufficient fund provision has been for the Mission. Collectors are being extended all required administrative and technical support. Since ground work has been done, all districts should now be able to achieve the physical target within October, 2018”.

Replying to a media query after the meeting Chief Secretary Padhi said, “we have made substantial progress in comparison to October, 2014 when we started the campaign. As of now 2 districts namely Deogarh and Jharsuguda have been declared ODF. Detail work plan has been grounded to make another 4 districts ODF by end of July. These districts are Balasore, Gajapati, Sambalpur and Subarnapur”. It may be pertinenet here to mention that the present average coverage in these districts is around 74%.  Chief Secretary further said that target has been set to cover 100% of households in the State by end of current year.

Available data show, presently 45,03,128 households ( 55% of the total) in Odisha  have toilets.  Apart from the 6 districts cited above, other 4 districts namely Jagatsignhpur, Rayagada, Kandhamal, and Sundargarh have crossed 60% coverage. Another 15 districts have crossed 50% coverage. Around 3700 villages have reached the level of 100% coverage of household toilets. Presently, the verification is going on and they will be declared ODF within a month. The geo tagging of the toilets have also picked up significantly. Around 73% of the toilets completed so far have been verified and geo-tagged.

Available data show, presently over 14000 Swechhagrahis have been engaged at village level. Along with them around 1 lakh para-government workers are working in the field for promoting safe sanitation practices and use of toilets.