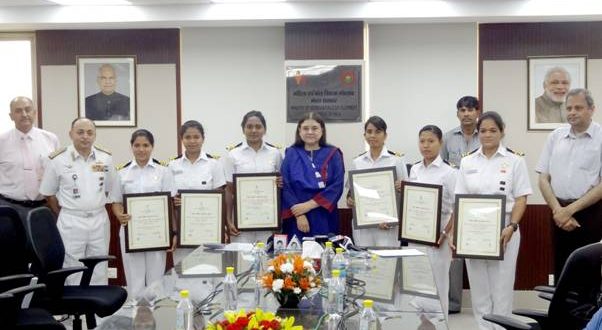 in National May 24, 2018 Comments Off on Nari Shakti Puraskar 2017 presented to the INSV Tarini Team 556 Views

Speaking on the occasion,the Minister congratulated the team and said that INSV Tarini team is an inspiration for the future generation to excel in a sector that has historically not seen the participation of many women. She also added that Nari Shakti Puraskar is one step towards acknowledging the team for their exemplary courage and team spirit.

The President of India, Shri Ram NathKovind, had conferred the Nari Shakti Puraskars on International Women’s Day(08th March 2018) in RashtrapatiBhavan.As the INSV Tarini team was sailing then, the award could not be presented to the team.

The crew of the Indian Navy Sailing Vessel ‘Tarini’ is a part of the Indian Navy’s uniqueproject ‘Navika SagarParikrama’, an all-women team circumnavigating the globe,promoting ocean sailing activities in the Navy and depicting Government of India’scommitment towards women empowerment. Each crew member has minimum of20,000 nautical miles sailing experience. The Project aims to demonstrate the thrust ofNari Shakti on the world platform.The voyage also showcased the ‘Make in India’initiative by sailing on-board the indigenously built INSV Tarini.

The Six-member all-women team,led by Lieutenant Commander Vartika Joshi circumnavigated and managed the whole operation in this first ever global journey. The voyage which lasted for 254 days,with 199 days at sea covered 21600 nautical miles, had 5 port calls in Fremantle,Australia;Lyttelton,New Zealand;Port Stanley,Falklands;Cape Town,South Africa and finally at Mauritius before returning home to Goa.All six members of the crew were trained for over three years under Captain DilipDonde, who is also the first Indian to successfully carry out solo-circumnavigation of the globe between 2009 and 2010.

The women who showed exemplary courage and team spirit had to face strong winds of more than 60 knots and very high waves of upto 7 metres. The crew used an indigenously built INSV Tarini, a 55-foot sailing vessel. The vessel also encountered rough seas, high stormy conditions and severely cold temperatures making the expedition an extremely challenging one. Apart from successfully circumnavigating the globe on a 55-foot yacht, the crew also collated and updated meteorological, ocean and wave data on a regular basis for accurate weather forecast by Indian Meteorological Department and reported marine pollution on the high seas. They interacted extensively with the local populace, especially children, during the port halts to promote ocean sailing and spirit of adventure.

2018-05-24
Editor in chief
Previous: Odisha Government has initiated the refund process for chit-fund scam affected people
Next: Education must aim at holistic development of an individual: Vice President