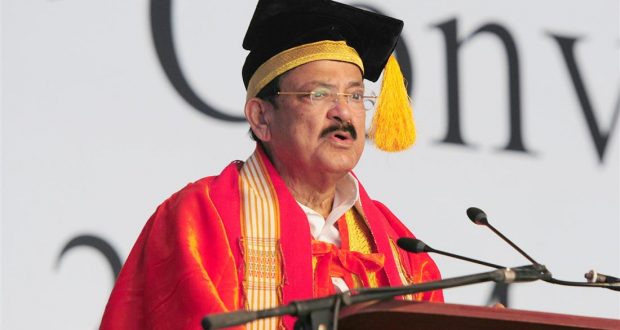 Corridors of connectivity should be converted into corridors of economic growth: M. Venkaiah Naidu

in National May 23, 2018 Comments Off on Corridors of connectivity should be converted into corridors of economic growth: M. Venkaiah Naidu 737 Views

Dimapur:23/5/18:The Vice President of India,  M. Venkaiah Naidu has said that there is an immense investment potential in the Northeastern region and ASEAN countries should not be allowed to miss that opportunity. He was addressing the 2nd Convocation of National Institute of Technology, in Dimapur, Nagaland today. The Governor of Nagaland, Shri Padmanabha Acharya and other dignitaries were present on the occasion.

The Vice President said that Nagaland, a state, rich in its traditional heritage is growing fast and setting up of NIT is an indication of the growing importance of this region. The real strength of any academic institute lies in maintaining high standards of excellence through its teaching and top quality research, he added.

The Vice President said that North-Eastern region is endowed with abundant natural resources, but difficult terrain, dispersed habitations, poor connectivity and inadequate infrastructure have been obstacles in realizing its true potential. He further said that improving connectivity is most important to bring the North East region into the mainstream and air connectivity is also vital for promoting tourism, business and people-to-people contact. We strongly believe that the corridors of connectivity should be converted into corridors of economic growth with a symbiotic market model of development, he added.

The Vice President quoted as stated by Nelson Mandela, former President of South Africa: “Education is the most powerful weapon which you can use to change the world”.

The Vice President said that the knowledge and technical skills acquired by the students will form the main pillars of their professional career. But the life skills acquired by them and the values of ethics, morality, integrity and compassion are equally important in navigating through the challenges and contributing to building an inclusive New India, he added.

The Vice President advised the students to remember that their education does not end with the acquisition of a degree or by securing employment. He further said that learning is a life-long process and education is meant to enlighten them, develop them into a holistic individual, strengthen their character and inculcate the qualities required to face any challenging situation with a sense of equanimity. Their character is formed by the manner in which they surmount the challenges and they will experience highs and lows of life, but never lose sight of the goals they set for themselves, he added.

2018-05-23
Editor in chief
Previous: Cabinet approves waiver of of penal interest amounting to Rs.1076.59 crore in respect of Paradip Port Trust
Next: PM’s interaction through PRAGATI