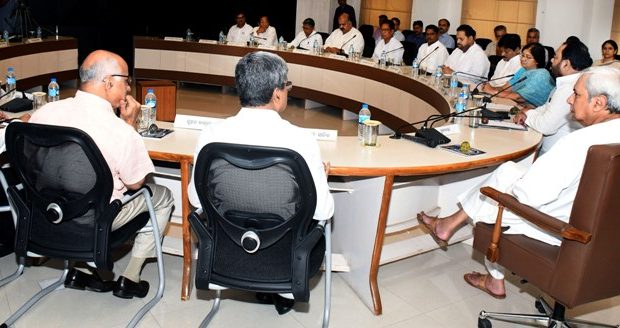 Bhubaneswar:21/5/18;The Odisha Chief Minister Naveen Patnaik today expressed satisfaction over BJD government’s achievements in the state during the last four years and asked his ministers to work hard every minute to meet the aspirations of the people.

The Patnaik government completed four years in office of his fourth term.

“Let us all pledge to work hard every minute to honour the faith of our people with dedication, determination and devotion,” Patnaik said he is indebted to the 4.5 crore people of Odisha who have faith in BJD’s commitment and capability for working towards an empowered Odisha.

“Transparency, teamwork and technology will be our mantra to bring about transformation,” the chief minister told reporters after the meeting of the council of ministers.

Highlighting the major achievements of his government, Patnaik said in the last four years Odisha has been ranked as the champion state in exports. “We also top the country in live manufacturing investments,” he said.

Odisha is the leading state in the country also in skill development programme with nine lakh youths trained against the target of 11 lakh, Patnaik said.

He claimed that Odisha lead the country in construction of rural roads with a record 22,500 km in the last four years. Six hundred bridges have been constructed under Biju Setu Yojana while Biju Expressway connecting north and south Odisha passing through the KBK region will meet its target date.

On the agriculture front, Patnaik said the state had produced 117 lakh metric tonnes of grain and the government has made provision of crop loans for sharecroppers and Millet Mission for rainfed areas.

In the last four years nearly 17 lakh pucca houses have been constructed. Construction of another seven lakh such houses will be completed by March 5, 2019 as a tribute to former chief minister Biju Patnaik.

Referring to electrification, he said 17 lakh households have been electrified in the last four years and the government was targeting to provide electricity to all households by October 2, 2018, he said.

Four medical colleges have been set up from among the proposed nine, Special Tribal Development Councils have come up in nine districts, 70 lakh women empowered through various self help groups and nearly 30 lakh women covered under the Mamata Yojana.

Patnaik said that Odisha is fast becoming a major sports hub and several international events had been hosted at Bhubaneswar.

The chief minister said Odia language has been accorded the status of a classical language and the special cabinet held at Puri on December 26, 2017 took several decisions to promote it in all walks of life