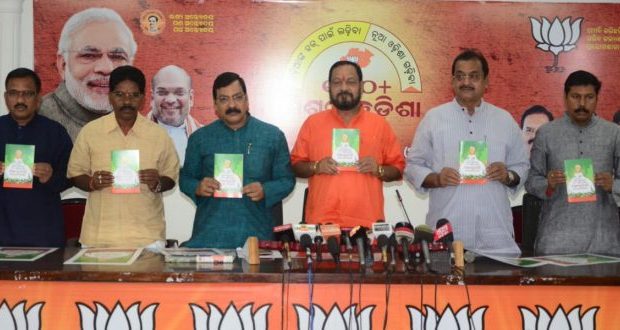 in State News May 21, 2018 Comments Off on Odisha BJP released a charge sheet against the Biju Janata Dal (BJD) government 1,019 Views

Bhubaneswar:21/5/18; Ahead of Prime Minister Narendra Modi’s visit to Odisha, the state unit of Bharatiya Janata Party (BJP) on Monday released a charge sheet against the Biju Janata Dal (BJD) government on completion of four-year in government in the fourth term.

The party has decided to reach out to people with a list of allegations against Naveen Patnaik Government citing 36 instances of corruption.

“Corruption and scam are prevalent in the state. We will reach out to people and highlight the multi-thousand crore corruption committed by the ruling BJD. We will bring out a charge sheet against the Naveen Patnaik Government listing 36 instances of major corruption, including the multi-crore mining and chit fund scams,” said Panda.

Chargesheet would list the cases of corruption of the BJD government in its last 18 years of rule, said Panda.