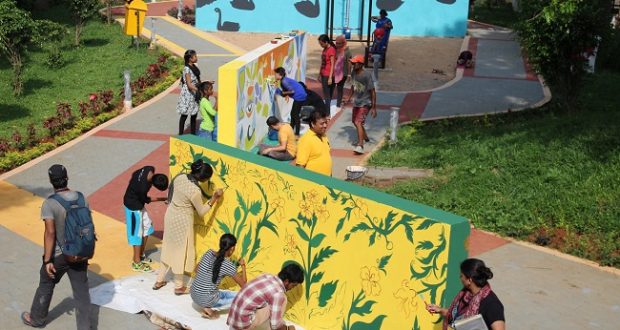 With features like graffiti walls, amphitheatre and dedicated spaces for community gardening, this park is being developed on Child Friendly Design Principles and the event has further added vibrancy to the parks, while constructively engaging the citizens.Bhubaneswar Urban Knowledge Centre (BUKC) of the Bhubaneswar Development Authority (BDA), which had designed the smart parks, was the knowledge partner for this activity and city-based volunteer organisation Bakul Foundation was the art partner for this programmme, organised by Bhubaneswar Smart City Limited (BSCL) as part of Street Art and Mural Project (STAMP). In fact, STAMP has been a tool to beautify space through transforming walls, flyovers, streets and public spaces with meaningful art and it had a major impact during the 22nd Asian Athletic Championships, held in the city, last year.In total, the smart park in Saheed Nagar has 12 designated theme-based walls for murals and graffiti which are also envisioned to double up as open air art exhibition walls in the future. While the broader theme was ‘Art for Relaxation’ or ‘Art as Therapy’ for all the murals, the artists were divided into 12 different groups allowing them to pick a theme for creating the murals on both side of any one of these walls. The kids and community members joined these groups contributing in their own ways for the cause.

BSCL General Manager (Operations) Bijay Kumar Swain and Deputy Collector Khordha Talat Afreen, were present at the venue and took part in the activities. It may be noted here that all the three child-friendly Smart Parks in Saheed Nagar area have almost reached the completion stage and are expected to be formally inaugurated in the coming months.

2018-05-20
Editor in chief
Previous: Oil Ministry’s 1st Skill Development Institute in Bhubaneswar completed its two years of successful journey
Next: Maa Tarini Temple at Ghatagaon moved one step ahead not to perform Puja if motorists come without helmets