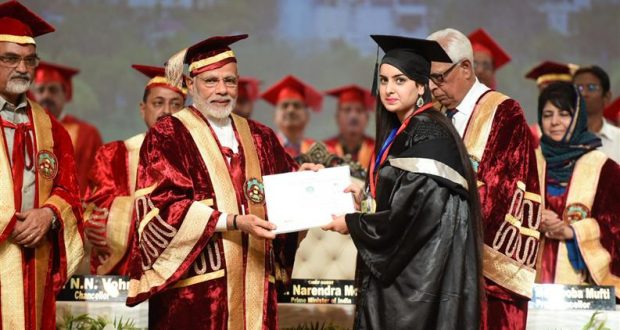 PM in Jammu: attends Convocation of Sher-e-Kashmir University of Agricultural Sciences and Technology

in National May 19, 2018 Comments Off on PM in Jammu: attends Convocation of Sher-e-Kashmir University of Agricultural Sciences and Technology 1,126 Views

Jamu:19/5/18;The Prime Minister, Shri Narendra Modi, today attended the Convocation of Sher-e-Kashmir University of Agricultural Sciences and Technology in Jammu. At another event, he also laid the Foundation Stone of the Pakaldul Power Project, and Jammu Ring Road. He inaugurated the Tarakote Marg and Material Ropeway, of the Shri Mata Vaishno Devi Shrine Board.

In his address at the convocation, the Prime Minister said that technology is bringing about change in all spheres of life, and the youth of our country is keeping pace with these developments.

He said that even in agriculture, there is need to develop a new “culture” through infusion of technology, to benefit farmers.

The Prime Minister said that the policies and decisions of the Union Government are aimed at increasing the income of farmers.

He expressed confidence that through Scientific Approach, Technological Innovations, and Research and Development  the graduating students would play an active role in turning agriculture into a profitable profession.

After laying the Foundation Stone of the Pakuldul project, the Prime Minister said it is a unique day when one hydropower project has been inaugurated; and the Foundation Stone has been laid for another one. He said that the Union Government is working with an approach of “isolation to integration” to develop all the hitherto under-developed parts of the country.

He said that the Tarakote Marg would provide an alternative route to the Mata Vaishno Devi Shrine, which would facilitate pilgrims. He said tourism, especially spiritual tourism, is a very important source of income generation for the State of Jammu and Kashmir.

2018-05-19
Editor in chief
Previous: Vice President calls for increased investments in agriculture
Next: Resignation of BS Yeddyurappa is the victory of the rule of law and constitution :Ghulam Nabi Azad