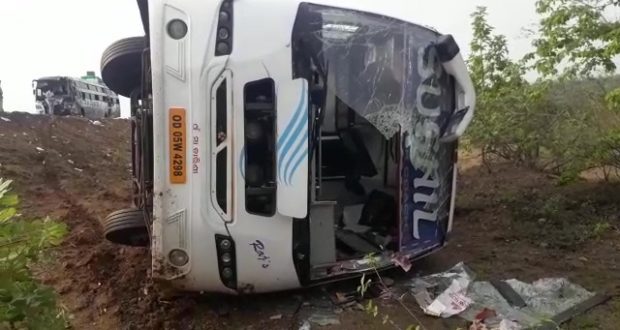 Over 70 passengers escaped with minor injuries in bus accident

in District Diary May 19, 2018 Comments Off on Over 70 passengers escaped with minor injuries in bus accident 1,202 Views

Dhenkanal:19/5/18; At least 70 passengers escaped with minor injuries as a bus they were travelling in skidded off after another bus hit it from back at Katumunda under Parjang police limits in Dhenkanal district late last night.

According to reports, both the night coaches were on their way to Rourkela from Bhubaneswar when the mishap occurred near Kamakhyanagar.

The ill-fated bus was parked at Katumunda Chhak when another Bhubaneswar-bound night coach rammed into the bus from back following which it turned turtle.

Police and locals swung into action and rescued the passengers of both the buses.

The injured passengers have been admitted to Talcher and Parjang hospitals and their condition is said to be stable.

2018-05-19
Editor in chief
Previous: Dr Arun Kumar Panda has been appointed as Union Health Secretary
Next: Children Theatre Workshop by IGNCA from 21st May to 21st June