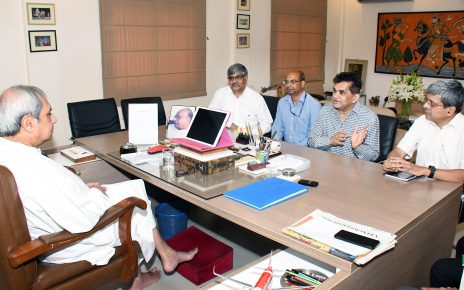 “NITI Ayog will take up the issues with respective Ministries and find out appropriate solutions,” the Chief Executive Officer of NITI Ayog Amitabh Kant said after holding a brain storming exercise with Central Pravari officers, Development Commissioner R Balakrishnan, Secretaries of different departments of State Government and Collectors of the concerned districts.

Chief Secretary Aditya Prasad Padhi asserted about the programme set on fast track at the high level meeting. He pointed out the common basic requirements of the 10 identified districts on 5 thematic areas as outlined by NITI Ayog, said official sources.

The Collectors appraised about the strength, potential, present status and challenges of their respective districts which were taken note by Kant.

They mostly pointed out the challenges like lack of banking facility, upgradation of medicals, starting of health & wellness centers, data connectivity, additional grant to non-DMF and Non-OMBADC and extremist effected districts.

2018-05-19
Editor in chief
Previous: Resignation of BS Yeddyurappa is the victory of the rule of law and constitution :Ghulam Nabi Azad
Next: Naveen Patnaik urged Prime Minister for establishment of a dedicated Defence Industry Corridor