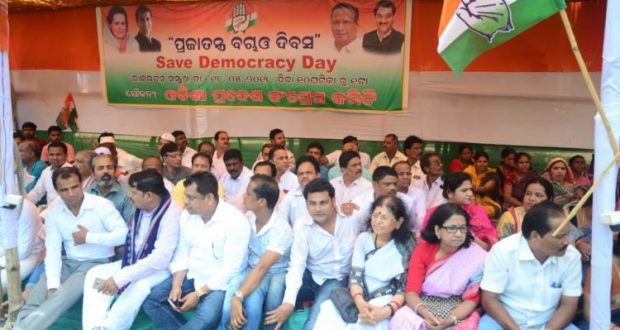 in Smartcity Bhubaneswar May 18, 2018 Comments Off on Odisha Pradesh Congress Committee observed Save Democracy Day 681 Views

Later in the day, senior members of the Odisha Congress submitted a memorandum to the President of India through Odisha Governor urging him to safeguard democratic principles and the sanctity of the Constitution.

It was a part of the nation-wide dharna in front of Raj Bhawans at state capitals and all district headquarters launched by Congress protesting the alleged partisan and authoritarian act of Karnataka Governor Vajubhai Vala inviting the BJP to form government in the state.

In a letter to all the PCCs, AICC General Secretary Ashok Gehlot stated that the Governor of Karnataka has colluded with the Bharatiya Janata Party to subvert the democracy in Karnataka by inviting BJP leader to the oath of secrecy, at a time when Congress and JD(S) have submitted the list of MLAs which is more than the required number to form the government.