Top Headlines
Home » District Diary » A man, who got trapped inside a pumping station pipe was rescued after a six-hour 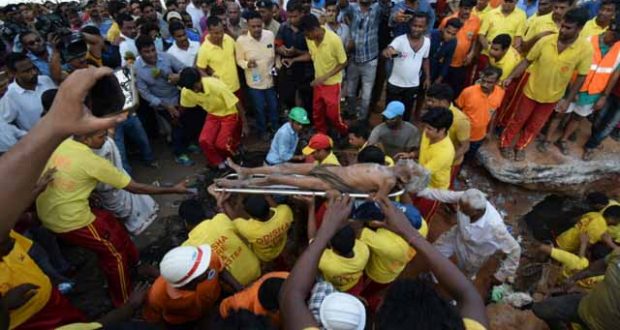 A man, who got trapped inside a pumping station pipe was rescued after a six-hour

in District Diary May 17, 2018 Comments Off on A man, who got trapped inside a pumping station pipe was rescued after a six-hour 935 Views

Cuttack:17/5/18: A man, who got trapped inside a pumping station pipe at Tulasipur in Cuttack city, was rescued after a six-hour-long rescue operation conducted by ODRAF and fire personnel on Thursday.

The victim got trapped at around 8 am this morning while carrying out cleaning work conducted by Cuttack Municipal Corporation (CMC).

The victim was identified as Pranakrushna Muduli, an employee of the CMC. He got stuck slipping about 25 feet inside the 2.5-wide pipe after a staff of the pumping station switched on the pump accidentally.

On being informed about the incident, ODRAF and fire officials rushed to the spot and launched an operation to rescue Muduli.

Rescue operation was conducted with the use of suction machine, breathing apparatus, blower and other equipments. Besides, he was being supplied with oxygen to sustain inside the pipe.

It stood as a challenge before ODRAF and fire brigades to rescue him alive and they won after almost six-hour-long continuous effort.

The rescue operation was carried out in presence of Collector Sushant Mohapatra, senior officials of ODRAF and fire department.

2018-05-17
Editor in chief
Previous: Cities are drivers of economic growth & people living cities need to be provided with adequate housing: Vice President
Next: Plus II Science Result On May 19