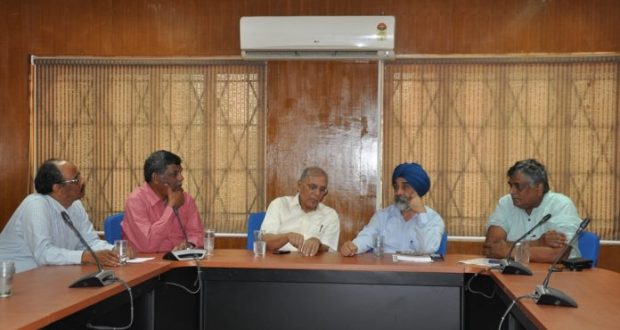 in National May 16, 2018 Comments Off on INTACH Bats For Transfer Of Odisha Documents 591 Views

Bhubaneswar: A delegation of the Indian National Trust for Art and Cultural Heritage (INTACH) today met Pritam Singh, the Director General of the National Archives of India  at the Bhubaneswar Centre and handed over a memorandum with the request for transferring many Odisha related documents and records from New Delhi. The National Archives of India, which just completed its 125th anniversary, is under the Ministry of Culture and has a Regional Office at Bhopal and three Records Centres at Jaipur, Puducherry and Bhubaneswar.

The  three member delegation led by INTACH State Convenor Amiya Bhusan Tripathy, Bhubaneswar Chapter Convenor Baikuntha Panigrahi  and  Projects Co-ordinator Anil Dhir met the Director General and appraised him of the difficulties faced by scholars and researchers  who have to go to Delhi to  access the records. The New Delhi office is holding many important and valuable records pertaining to Odisha, many of them have not even been listed.  In the memorandum, they specifically mentioned that the entire records of the Orissa State Agency (1917-1947) in 18 Volumes, the Balasore Factory Records and The Bengal Public Consultations in 22  Vols are of great importance, and the only copies are in Delhi.

The Director General said that the National Archives was in the process of digitizing nearly 3 crore documents and assured that he would prioritize the important Odisha papers. Dr. M.A. Haque, the Deputy Director of Archives and Dr. Lalatendu Das Mohapatro, Assistant Director too were present at the meeting.