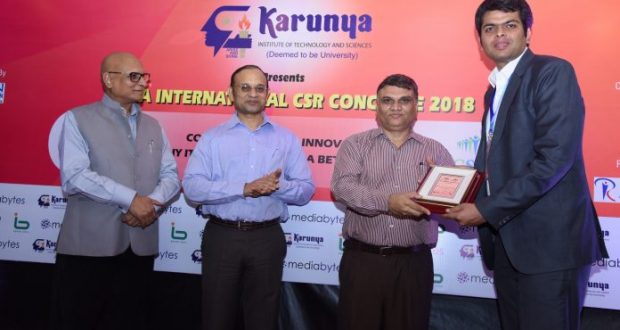 JSPL Foundation has been conferred with CSR Excellence Award 2018

in District Diary May 15, 2018 Comments Off on JSPL Foundation has been conferred with CSR Excellence Award 2018 679 Views

The Foundation received the Award for its outstanding work in the field of skill development promoted through OP Jindal Community College in Odisha, Chhattisgarh and Jharkhand and decentralised initiatives in these states and other parts of India.

Congratulating the team, Co-Chairperson of JSPL Foundation Shallu Jindal said, “We at JSPL Foundation pursue skill building development Programme as a tool for bringing sustainable development of the community and nation building. Our effort of skill development among rural people through the OP Jindal Community Colleges which are operational in Odisha, Chhattisgarh and Jharkhand and promotion of soft skill and entrepreneurship training among thousands of rural women, farmers and artisans have been contributing to the building of a better and stronger Tomorrow for India. I congratulate the Team OPJCC and Team CSR for winning the India International CSR award 2018 in Skill Building.”

JSPL Foundation runs five OP Jindal Community College – two in Odisha, two in Jharkhand and one in Chhattishgarh – to impart Industry appropriate and demand-driven quality technical vocational skills education and training aligned with the market. More than 1,100,000 youth from India and about 27,000 youths from Odisha have been trained at these Community Colleges and earning their livelihood respectfully on a sustainable basis. Besides, the Foundation also organises skill development training like stitching, incense stick making, farm production techniques, mushroom cultivation and other for developing entrepreneurship among rural women.

Chairman of JSPL Naveen Jindal has been focussing on skill development of the rural youths as one of the most effective tools of nation-building and OP Jindal Community College is his brainchild.