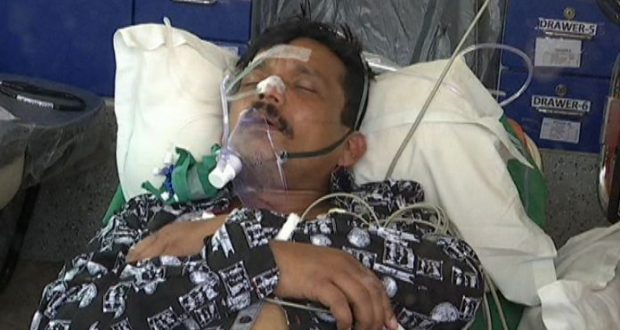 Bhubaneswar:15/5/18; Popular Ollywood actor and comedian Papu Pom Pom was shifted to the All India Institute of Medical Sciences, New Delhi, in a critical condition on Tuesday.

The ailing actor, accompanied by his family members, left for the national capital in an air ambulance at 2 pm. Several Odia film actors and producers saw him off at the Biju Patnaik International Airport here.

Papu had recently gone to Bangkok to shoot for an upcoming odia movie FOUR IDIOT. After returning from there, he was working on a new movie in Cuttack. While his way to Bhubaneswar, he had acute pain in the lower abdomen and called up his friends, who got him admitted to SUM Hospital where the doctors diagnosed him with acute pancreatitis.

Though his condition was stable the last two days, he complained of acute chest pain on Monday. He was later admitted to the intensive care unit (ICU).

The doctors at the SUM Hospital had advised the family members to shift Papu to the AIIMS for better treatment.