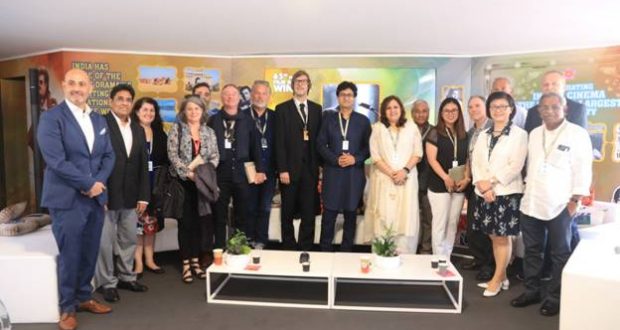 Speaking about the growth of the nation being well reflected through our cinema H.E Vinay Mohan Kwatra, said that what is happening in our country currently is the unprecedented transformation in technology and the economy and that these growing externalities are reflected in Indian Cinema. Shri Jerome Paillard stated that Indian Pavilion is a very important tool to help connecting the worldwide European and worldwide community of films.

Speaking about Indo-French Cinema collaboration Ms Vani Tripathi Tikoo, said that India has a fantastic relationship with both Cannes film festival and the French film industry. She further added that in recent times films like Tamasha and Befikre were shot extensively in this part of the world and found great resonance with the narrative story telling between the two countries.

During the Inaugural address, Shri Prasoon Joshi said that we should also reach out to young filmmakers who might not have access to a festival like Cannes and should organize many mini Cannes film festivals all around the world to help more and more filmmakers.