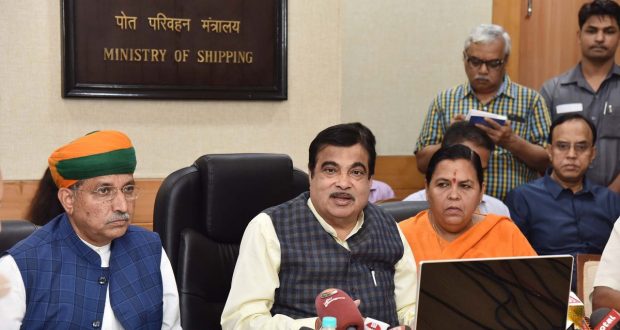 Newdelhi:10/5/18; “We hope to clean 70 to 80 percent Ganga by March 2019. It is a general perception that nothing significant is being done under Namami Gange Programme but this is not correct. 251 Gross Polluting Industries (GPI) have been closed and closure directions have been issued to non complying GPIs”. This was stated by Union Minister for Water Resources, River Development and Ganga Rejuvenation, Shri Nitin Gadkari while addressing a press conference in New Delhi today. The Press conference was also linked to Patna, Varanasi, Lucknow and Kanpur through video.  The Minister said, real time monitoring of pollutions is being done in 938 industries. 211 main ‘Nallas’ have been identified which are causing pollution in Ganga and 20 modular STPs are being deployed to treat Nalla water. Regular review meetings with all the states government officials, contractors, consultants are being done and obstacles regarding DPR’s, Tendering Process, finalisation of design, Payment to contractors are being removed for speedy completion of Projects.

Addressing the press conference Union Minister for Drinking Water and Sanitation Sushri Uma Bharti said that almost all the 4470 villages on the bank of Ganga are now Open Defecation  Free (ODF) and now we are working on the strategy of ODF plus. She said measures like Solid-Liquid waste management, tree plantation, making villages and towns plastic free and awareness programmes are being adopted. Sushri Bharti said, “Our Ministry is working on Ganga Gran Project which is based on holistic development of villages situated on the bank of River Ganga with active participation of villages. Organic Farming, Water Conservation Project, proper disposal of solid and Liquid waste and renovation of Ponds will be emphasized in Ganga Grams”.102 projects out of 195 were sanctioned for creation of 2369 MLD new sewage treatment plants (STPs), rehabilitation of 887 MLD of existing STPs and laying/rehabilitation of 4722 km sewer network for abatement of pollution in river Ganga and Yamuna. Till date 24 projects have been completed which has created 217 MLD STP capacity, rehabilitated 62 MLD STP capacity and 1879.5 km of sewer network has been laid. Presently, 45 sewage infrastructure projects are under execution. These projects envisage creating 841 MLD sewage treatment capacities. Another 33 projects are under various stages of tendering. In a paradigm shift in sewage sector in the past one year, works on two STP projects (50 MLD in Varanasi and 82 MLD in Haridwar) have been started under Hybrid Annuity PPP mode (HAM). Other projects sanctioned under HAM are Naini, Jhusi, Phaphamau, Unnao, Shuklaganj, Mathura, Kanpur, Mirzapur, Gazipur and Farrukhabad in Uttar Pradesh; Digha, Kankarbagh and Bhagalpur in Bihar; Howrah, Bally and Tolly’s Nalla (Kolkata), Kamarhati and Baranagar in West Bengal. These sewage management projects will take care of the current gap in sewage treatment and will also sustain the sewage treatment for future.