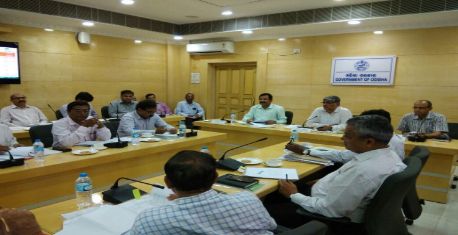 in Business May 10, 2018 Comments Off on Odisha tops in RIDF performance 819 Views

BHUBANESWAR:10/5/18; One of the major beneficiaries of Rural Infrastructure Development Fund (RIDF), Odisha has recommended 14,346 projects estimated at Rs 10,328 crore to the National Bank for Agriculture and Rural Development (Nabard) for 2018-19. Reviewing the progress of projects sanctioned under RIDF during  2017-18, Development Commissioner R Balakrishnan directed various departments to submit detailed project reports (DPRs) of spillover and newly sanctioned projects.

In 2017-18, the State had recommended 14,455 projects estimated at Rs 5,514 crore to Nabard under RIDF against which 2,351 projects worth Rs 2,539 crore were sanctioned. However, fund utilisation by different departments was Rs 3,872 crore.Chief General Manager, Nabard regional office, Krushna Chandra Panigrahi said the national bank had disbursed Rs 2,512 crore to the State Government from RIDF against the claims made by various departments in the last fiscal. The RIDF loan disbursal was highest among all the States. He said, Odisha tops the list with Rs 2512.36 crore disbursement followed by Gujarat with Rs 2062.91 crore and Rajasthan with an investment of Rs 1,851.39 crore.

The departments implementing the infrastructure projects under RIDF, include Agriculture and  Farmers Empowerment (1485  projects), Water Resources (671), Panchayati Raj and Drinking Water (175), Works (6) and Rural Development making a total of 2351 projects. So far, around 60 per cent of the projects under RIDF have been completed and balance projects are in progress.

Deputy Chief General Manager, Nabard, Narayan Chandra Pani said the Regional Office, Bhubaneswar has been honoured with best performance award for 2017-18 for diversified project lending in which RIDF is a major component.

2018-05-10
Editor in chief
Previous: Maoist camp busted on Tulsi hills during combing operations
Next: Bloated bodies of a woman and her three children were fished out from Mahanadi

Import of Paper brought under Compulsory Registration from 1st October