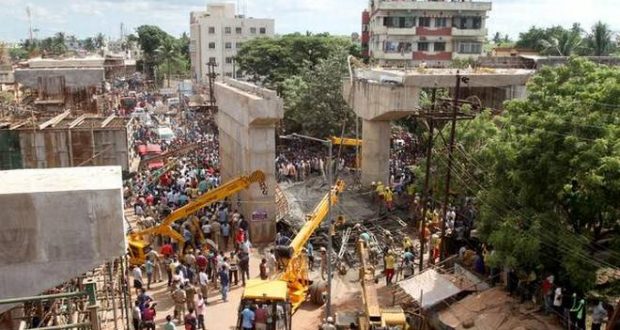 Bhubaneswar:10/5/18; The Odisha government on Thursday said construction company Panda Infra Projects is responsible for Bomikhal flyover collapse that killed a labourer and injured another last week. Works Minister Prafulla Mallick said, “The department has received the probe report on the Bomikhal flyover collapse. The contract agency is completely responsible for the accident. It was not careful about the safety of the bridge. Even the labourers engaged in the construction were not a skilled one.”

He said that the concerned company has been debarred from the work.

The government will take over the charge of pending work, he added.

The Minister said the government will try to complete flyover work within two months.

Similarly, a fresh tender will be floated for Sambalpur and Jatani flyover, where Panda Infra has been assigned the construction work, he maintained.

“A total amount of Rs 2 crores will be spent to finish off the Bomikhal flyover as there is not much work left. Moreover, a third party safety audit will be done after the completion of the project. If any discrepancy is noticed, due rectifications will be made before opening the flyover for the use of the public,” Works Secretary Nalini Kanta Pradhan said.

Meanwhile, one of the directors of Panda Infra Project Prashant Panda has been arrested in connection with the mishap that took place on May 4.

A day after the mishap, Commissionerate Police arrested the managing director of the company Pratap Panda.

2018-05-10
Editor in chief
Previous: Agitating students of Ravenshaw University called off their stir
Next: Maoist camp busted on Tulsi hills during combing operations