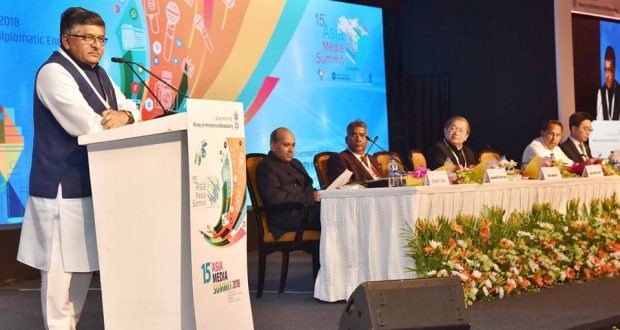 Media must empower the common man in an accountable manner: Ravi Shankar Prasad

Newdelhi:10/5/18;Union Minister of Electronics & IT and Law & Justice, Sh. Ravi Shankar Prasad said today that for the Indian Government, freedom of media is integral to polity, duly recognized by the Constitution and reinforced by Judiciary in series of judgements. Addressing the 15th Asia Media Summit here today, Shri Prasad said that the media has full right to inform, circulate, criticize, advice and counsel. The rights of Media under the Constitution are also subject to reasonable restrictions.

On misuse of data, the Minister said India will not allow the country to become a centre of data pilferage, and that data commerce through collusive methods cannot be used to influence its electoral process. Shri Prasad said all the online companies which are in the business of data commerce must understand the nuances of accountability. He said that when the recent controversy surrounding data privacy surfaced, the Government took a very firm stand on these issues. Shri Prasad further said that accountability is integral to democracy and all institutions – the Government, the Judiciary, the Legislature and the Media – have to adhere to this principle. Referring to India becoming a very big centre of data analysis, he said that there is a need to have a proper coordination on data availability, data utility, data innovation, data anonymity and data privacy. He said that a committee headed by a retired Supreme Court Judge is looking into these issues and soon the Government would enact a data protection law.

Dwelling upon the issue of Ethical Journalism, the Law Minister said that it must be fair, true, properly presented highlighting sights and counter sights and empowering the consumers of news in a decent and independent fashion. The Minister wondered whether the media today, under the garb of sensationalism, paid news, fake news, too much of other insidious practices is addressing to this large issue. This is a matter of debate, the Minister added.

2018-05-10
Editor in chief
Previous: Historically significant original Science & Technology antiquity objects will be on display at Nehru Science
Next: We hope To Clean 70 to 80 Percent Ganga by March 2019: Nitin Gadkari