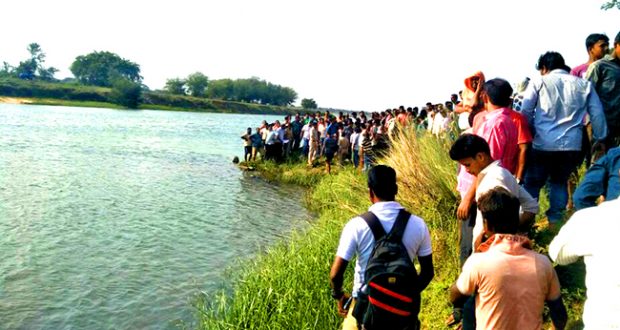 in District Diary May 10, 2018 Comments Off on Bloated bodies of a woman and her three children were fished out from Mahanadi 873 Views

Paradip:10/5/18: Bloated bodies of a woman and her three children were fished out today from Mahanadi river in Jagannathpur village under Paradip police station jurisdiction, sending shockwaves in the region.

The deceased persons have been identified as Mamina Sethy (35) and her two daughters-Barsha Sethy (8), Lisa Sethy (7) and son Sanatan Sethy (4). Fire brigade personnel and locals retrieved the bodies near a bathing ghat close to a temple in the village. Bodies were sent for post mortem. Exact cause of the death is yet to be ascertained. We are waiting for the findings of the post mortem report before arrive at any conclusion regarding the nature and cause of death, said Inspector Kujang Police Station, Dillip Kumar Sahu.

It may either be case of suicide or murder. However we are suspecting foul play, he said.

Incidentally Ananta Sethy, the head of the ill-fated family, had died recently in a road accident.

The family was locked in land dispute and that might have prompted assailants to usurp the landed property, police sources said quoting the contents of FIR lodged by deceased woman’s younger brother.