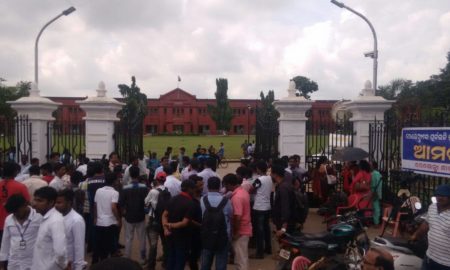 Agitating students of Ravenshaw University called off their stir

in District Diary May 10, 2018 Comments Off on Agitating students of Ravenshaw University called off their stir 877 Views

After a staff council meeting, Patro told reporters that sine die will be lifted on Saturday evening.

There will be no change in the decision on vacating hostels by May 28, the VC assured adding that the pending examinations will be conducted soon.

Earlier in the day, Governor and Chancellor of State Universities Satya Pal Mallik had directed Ravenshaw University authorities to resolve the concerns raised by the agitating students through discussion.

The move came a day after members of All India Democratic Students’ Organisation (AIDSO) submitted a memorandum to the Governor, seeking withdrawal of sine die closure that was imposed on Tuesday following students’ unrest.

A group of students had also staged a dharna near the varsity campus over the issue. They had earlier expressed displeasure over the authorities decision to close the varsity sine die, stating that it was not a solution to any issue.

The decision for sine die closure came after hundreds of students of staged a mass demonstration on the campus and gheraoed the vice chancellor’s office, protesting against fee hike and other pressing issues, on Tuesday.

The students under the aegis of Ravenshaw Chhatra Kriyanusthan Committee were opposing the steep hike in fee and the arbitrary decision taken by the university authorities to vacate the hostels by May 28 for carrying out renovation work.