Top Headlines
Home » National » Indian Community is fortunate to be the inheritors of a great heritage of timeless values: Vice President 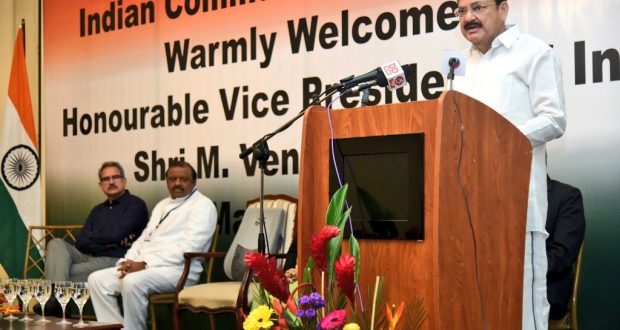 Indian Community is fortunate to be the inheritors of a great heritage of timeless values: Vice President

in National May 8, 2018 Comments Off on Indian Community is fortunate to be the inheritors of a great heritage of timeless values: Vice President 733 Views

Guatemala:8/5/18:The Vice President of India, Shri M. Venkaiah Naidu has said that Indian Community in Guatemala is fortunate to be the inheritors of a great heritage of timeless values. He was addressing the Indian Community Reception hosted by the Ambassador of India to Guatemala, Shri Sajeev Babu Kurup in the honour of Vice President of India, in Guatemala today. The Minister of State for Tribal Affairs, Shri Jaswantsinh Bhabhor, the Members of Parliament and other dignitaries were present on the occasion.

The Vice President said that the Indian diaspora is spread in various parts of the world and have contributed to the country they live as well as to the world. He further said that they may be living anywhere in the world and be in whatever occupation but they will add to the material and cultural capital of the country & the world by demonstrating, as ambassadors of our great country. The values of Satya, Dharma, Prema, Shanthi, Ahimsa and Seva –  many of they have been following these ideals which is why Indian diaspora is widely respected, he added.

The Vice President said that time has come for reforms to transform for betterment of people’s life. Equal opportunity for all, reaching the unreached, banking the unbanked, funded the unfunded is the need of the hour, he added.

The Vice President wished them and their families a very happy, fulfilling lives that make them stand out as a good, caring and sharing Indian and an esteemed, enlightened global citizen. India’s message to the world has been peace, inclusion, co-existence and harmonious development of individuals and society as a whole constantly nurture, he added.

2018-05-08
Editor in chief
Previous: Naveen Patnaik will review the performance of several departments in a phased manner beginning from 8th.May
Next: The 15th Asia Media Summit to be held from 10th -12thMay, 2018 in New Delhi