Top Headlines
Home » State News » Board of Secondary Education announced results of the annual Matriculation Examination:pass percentage has 76.23 per cent 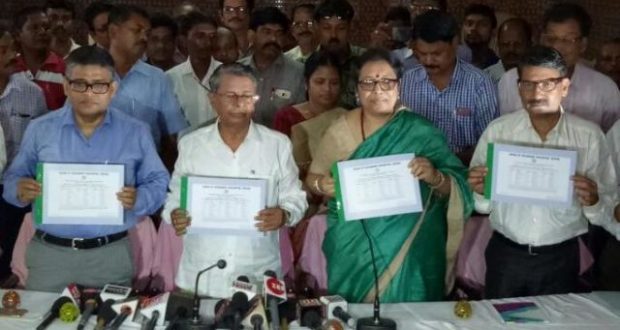 Board of Secondary Education announced results of the annual Matriculation Examination:pass percentage has 76.23 per cent

in State News May 8, 2018 Comments Off on Board of Secondary Education announced results of the annual Matriculation Examination:pass percentage has 76.23 per cent 705 Views

Cuttack:8/5/18; The Board of Secondary Education (BSE)  announced results of the annual Matriculation Examination on 7th,May,2018

The overall pass percentage has 76.23 per cent this year, informed the School and Mass Education Minister Badri Narayan Patra.

Like last year, this year too, the girls have outshone boys. A total of 2,22,043 girl students cleared the examination as compared to 2,16,305 boys.

According to reports, Balasore recorded the highest pass rate of 88.15 per cent and Malkangiri recorded the lowest at 59.32 per cent.

Similarly, the Board has also made arrangements to upload the OMR answersheets on www.bseodisha.ac.in at 2 PM.

As many as 6, 08,031 students had appeared for the annual examination at 2,818 centres across the state between February 23 and March 8.

2018-05-08
Editor in chief
Previous: Odisha Chief Minister launched the ambitious slum-titling project to accord land rights to urban slum dwellers
Next: At a time when IDCO has been entrusted with the revival Kalinga studioo, how can it be handed over to someone: Prafulla Samal