Top Headlines
Home » State News » Arup Patnaik has been appointed as the executive chairman of Odisha Youth Welfare Board. 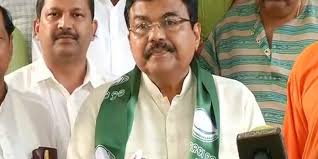 Arup Patnaik has been appointed as the executive chairman of Odisha Youth Welfare Board.

in State News May 8, 2018 Comments Off on Arup Patnaik has been appointed as the executive chairman of Odisha Youth Welfare Board. 877 Views

Bhubaneswar:8/5/18: Former Mumbai Police Commissioner Arup Patnaik who had recently joined the Biju Janata Dal (BJD) has been appointed as the executive chairman of Odisha Youth Welfare Board.

The Ex-top cop’s appointment was approved by Chief Minister and BJD supremo Naveen Patnaik on Tuesday.

Arup who had joined the conch party on April 18, will look after the Biju Yuva Bahini programme which was launched with an aim to nurture leadership and volunteerism, promote culture of sports and sportsmanship and healthy living among youths of the state.

With this, Patnaik has been given the rank and status of Minister of State.

Notably, the Odia IPS officer was the 36th police commissioner of Mumbai. He retired on September 30, 2015, holding various posts in Maharashtra Police for over a period of 36 years.