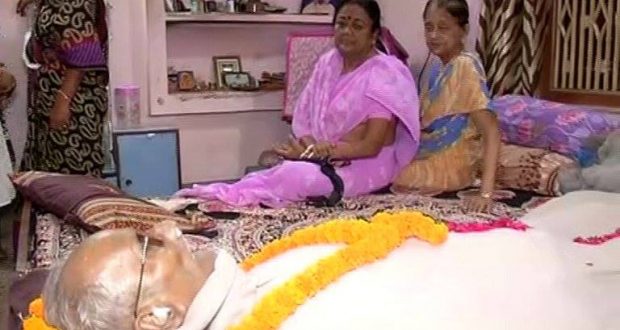 Poet, lyricist and music composer Guru Krushna Goswami passed away at the age of 84

in Odia Cinema May 6, 2018 Comments Off on Poet, lyricist and music composer Guru Krushna Goswami passed away at the age of 84 1,257 Views

Cuttack:6/5/18:Guru Krushna Goswami passed away  at the age  of 84  in his Cuttack residence on 6th,May,2018 Morning,Poet, lyricist and music composer Guru Krushna Goswami is a flamboyant personality in the field of Oriya literature, film and music. Born in the year 1934 near Baripada to Gokulachandra Goswami and Sraddhabati Goswami, he has over 1600 folk,devotional and modern songs to his credit. He is the celebrated lyricist of over 30 Oriya feature films, from Maa (1958) to Ranabhumi (1994).