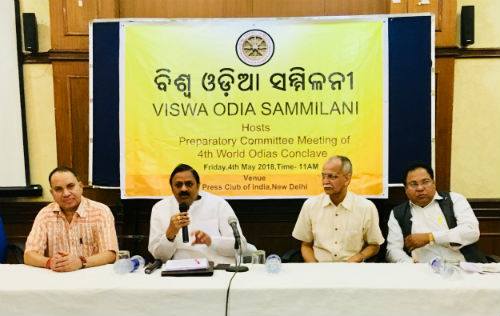 To commemorate its 25th Year Celebration in grand way one of the oldest organisation Vishwa Odia Sammilani , Cuttack,Odisha planned to organise 2 days long 4th World Odia Convention to present united views and suggestions for development of the State of Odisha and to facilitate interconnecting/network process among 7 crores Odiyas world wide at New Delhi on 28th -29th July, 2018.

Also, 4th World Odia Convention in New Delhi is slated to be organized with a spirit to materialize the dreams of the architect of modern Odisha and leading lawyer late Madhusudan Das and the Founder of ‘Vishwa Odia Sammilani’, late Rajkishore Raj, an eminent Odiya leader and litterateur of repute.

Attendees pledged unanimously to make the Silver Jubilee of the Vishwa Odia Sammilani a grand success. Primary objective of the ‘Sammilani’ is to bring nearly seven crore Odias across the globe onto one platform to realize for seeing all-round development of their mother sate. International Ambedkar Foundation Auditorium at New Delhi will be the venue where the convention will be held on the 28th and 29th July this year, as declared by the President of the ‘Vishwa Odia Sammilani’.

Reception and organizing committees are also constituted in this preparatory meeting. Mr. Rabindranath Pradhan and Mr. Sangram Dhar were named as the Chairman and Co-Chairman,respectively in the Reception Committee. Mr Akshay Samal and Mrs. Reeta Patra were chosen as the Vice Chairmen. The organizing committee was formed under the Chairmanship of Mr. Kshirod Kumar Jena. Mr Gobardhan Dhal and Ms. Shravani Swain would be the Vice-Chairmen and Former Ambassador, Mr Amarendra Khatua would be the Co-Chairman.

Mr. Pranab Pani would be the Chief Spokesperson and the senior lawyer Mr.Sanjib Kumar Mohanty would be the Co-Chief Spokesperson. Mr. Sanjeev Pattnaik and Mrs. Sashmita Tripathy will act as the Deputy Spokespersons, also. Mrs. Prantashri Jena is nominated as the coordinator for the United States of America. National and International Convener of ‘Vishwa Odia Sammilani’ and senior journalist, Mr. Kishore Dwivedi was also present in the Friday’s preparatory meeting.

2018-05-05
Editor in chief
Previous: Engineers spot defects in wheels of Devadalan, Taladhwaja chariots
Next: Night firing exercise of Army’s Air Defence Corps in the scenic tribal belt of Odisha along the Bay of Bengal.