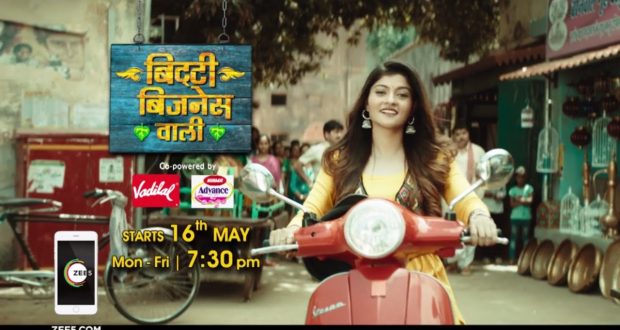 in Odia Cinema May 5, 2018 Comments Off on Prakruti Mishra is in the news again with the promo of &TV’s serial ‘Bitti Businesswali’ 2,925 Views

Bhubaneswar/Mumbai:5/5/18; After hogging the limelight for her performance inNatioal awarde Odia Film  ‘Hello Arsii’,Ollywood actress Prakruti Mishra is in the news again with the promo of &TV’s serial ‘Bitti Businesswali’ in which she plays the lead role, doing the rounds and her chirpy self winning hearts.The serial is going to aired  &TV’s from 16th ,May,2018 at 7.30PM.

Bitti Businesswali is an up and coming show Hindi TV serial on &TV channel. This new show is being created by Raakesh Paswan.

The show is about a young lady winning dignity with financial freedom.

Odiya on-screen character Prakruti Mishra has been reserved in to assume the female lead part of Bitti in Bitti Businesswali. The lovely on-screen character who is essentially a find of Zee TV’s Cinestars Ki Khoj, has highlighted in SAB TV’s Trideviyaan and the current Jai Kanhaiya Lal Ki on Star Bharat. Television actor Abhishek Bajaj has been reserved in to play the male lead in the show. Abhishek will be viewed as a contractual worker named Mahi.

Discussing his part in the new show, Abhishek shared “It’s amazing to get a chance to be a part of Bitti Businesswali. This is a story that needs to be told, it should be heard by every man and woman of our country”

The serial is being produced under the banner of Village Boy Productions Pvt. Ltd. by renowned producer and writer Rakesh Paswan. Prakruti has been cast opposite television actor Abhishek Bajaj. In the promo, she can seen challenging the generally mindset of the society, which wants women to stay confined to the four walls of house, making pickles. The term financial independence of women seems insignificant for men. However, it is not through words but deeds that she want to prove them wrong.

2018-05-05
Editor in chief
Previous: Varsha Priyadarshini will be back weaving magic on the silver screen with ‘Nimki
Next: Mogambo vrs Gabbar Singh:Big fight over Congress and BJP