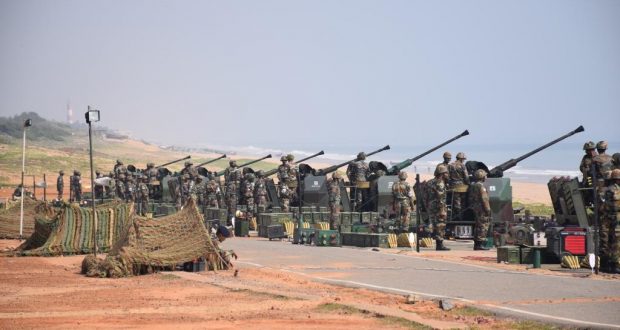 Night firing exercise of Army’s Air Defence Corps in the scenic tribal belt of Odisha along the Bay of Bengal.

in District Diary May 5, 2018 Comments Off on Night firing exercise of Army’s Air Defence Corps in the scenic tribal belt of Odisha along the Bay of Bengal. 1,832 Views

Gopalpur:(Odisha) 5/5/18:As the Sun slips into the mighty Bay of Bengal signaling the end of the day, the dust laden sky on the shimmering sea suddenly lights up with shooting rays of bright auburn hue. The rays, chasing each other in quick succession, dance around the sky for nano seconds, closing over a barely visible flying target, before the static comes alive,” it’s a hit, it’s a hit’! A small cheers goes up back on the shore, the barrel of the mighty gun, which just knocked the target out of the sky, takes a little slack and within seconds, is primed again for the next round of fire.

For the next half an hour, as the sky darkens into night, the dazzling dance of gunfire lights up the scene time and again, the volleys of shells hitting targets high above the deep waters accompanied by deafening sounds of booming guns and frequent chatter of the radio static being manned by men in olive greens.Welcome to the night firing exercise of Army’s Air Defence Corps (AAD), one of the youngest corps of the Army’s operational might. The action is taking place on the sea shore at Gopalpur-on-sea, a sprawling training establishment of AAD, located in the scenic tribal belt of Odisha along the Bay of Bengal. 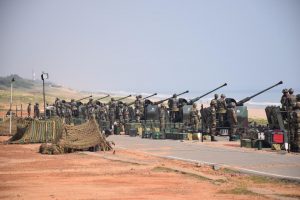 With its logo ‘Akashe shatrun jehi’ (no enemy can dare venture in our skies) this is the strike arm of the army which protects the airspace of the country. Although, the Air defence guns have been part of the Indian Army since the days of World War II as part of the corps of Artillery, Air Defence was given the status of an independent corps on 01 Jaunuary 1994, following which it established its own training college for officers and Centre for jawans at Gopalpur after bifurcating from the school of Artillery in Deolali, Maharashtra. The college is headed by an officer of Lt General rank .

As the corps enters its 25th year of existence as an independent arm, Gopalpur Military station with its learning centres has emerged as a centre of excellence on all ground based AD weapons and common training hub for all AD warriors   from Air Force, Navy, CAPF and CISF. The college also receives foreign officers from about 20 Asian and African friendly countries , including, Bhutan, Nepal, Myanmar, Mozambique and  Rwanda.  AD guns are also deployed at important national installations and strategic facilities to provide air cover around the clock

AAD came into existence in India in 1941 when the colonial government raised Anti Aircraft (AA) Artillery units in India to counter the Japanese air threat in South East Asia during WW II. In the three major wars fought by independent India, Air Defence crowned itself with glory, particularly during

1971 war, w inning four battle honours, namely Amritsar, Basantar, Chhamb and Samba besides a number of individual gallantary awards. A state of the art Army museum in the AAD centre traces the glorious journey of the corps battle march through years.

A visit to the college and centre, reveals how the AD warriors hone their skills as regular soldier as well as protectors of the skies, marking the transformation from ‘raw to razor’. “Today, every soldier and officer in the Indian army does a stint or two in the RR on the front , so there can be no compromise on physical fitness or learning battle craft in all kinds of warfare,” says an AD officer conducting the press.

the mainstay of the AD arsenal till now, however, induction of the latest Akash weapon system has heralded a modernizing drive for the AD warriors  “we are undergoing a major transformation as far as technological advancements and countering modern air threat ranging from unmanned drones to Beyond Visual Range engagements are concerned. New radars and missiles firing systems like Akash and Fly Catcher have been inducted and some others are in the pipeline. Men and officers are  kept  abreast of  all  the  latest  technologies  in  our  arsenal through  various  compulsory and competitive courses besides regular firing exercises,” says Lt Gen A P Singh, commandant of the AAD college.

Well laid out equipment parks and classrooms equipped with guns and radars like Flycatcher, Upgraded SFM and Reporter help officers and men hone their skills in the nuanced warfare of the air defence. However, the practical training at the seaward firing range is the Mecca for the warriors where all their acquired knowledge on the weapon systems is tested vigorously in the actual battle like situation.

A brief history of AAD in india

The Japanese air threat in South East Asia during World War II forced the British Government to raise Anti Aircraft (AA) Artillery units in India.  On 01 Jan 1941, the             Anti-Aircraft Training Centre (AATC) was formed  at  Karachi  and  thereafter  on  01  Mar  1941,  the  first  (Light  AA)  Regiment  was  also  raised  at Karachi.  By  the  end  of  1943,  the  total  number  of  AA  Regiments  in  India  was  32  along  with  seven Headquarters AA Brigades.  However, post World War II, most of the AA units were demobilized or converted to medium or field artillery regiments and by Aug 1947, only four AA units remained, of which two moved to Pakistan and two remained in India.  Rapid expansion of AA Artillery took place post independence and 15

On 01 Apr 1941, the ‘AA and Close Def (CD) Wing’ at Karachi was re-designated as the Anti-Aircraft and Coastal Artillery (AA and CA) School on a separate establishment.  On 01 Feb 1942, the AA and CA School at Karachi became the AA School.  On 01 Jan 1942,        No 2 AATC was raised and it moved to Deolali and took over duties of training LAA Gunners.  After partition, AA School at Karachi was moved to Deolali in 1947 and was amalgamated with School of Artillery as Air Defence Wing.  In 1989, Air Defence Wing moved to Gopalpur Military Station which was earlier inaugurated by the then Prime Minister Mrs Indira Gandhi on 30