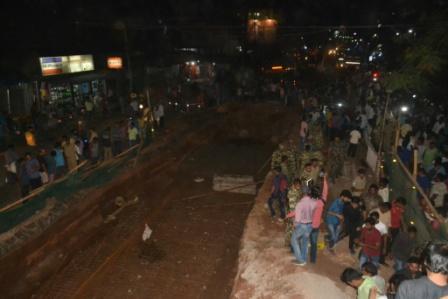 in Smartcity Bhubaneswar May 4, 2018 Comments Off on Portion of Bomikhal flyover caves in, 1 killed 734 Views

Bhubaneswar:4/5/18; Odisha government today announced Rs 5 lakh ex-gratia compensation towards the next kin of the labourer killed in Bomikhal flyover mishap in Bhubaneswar on Thursday evening.

It may be noted here that a labourer Ajay Vumicha (38) of Sundergarh was killed and another critically injured when a portion of an under-construction flyover caved in at Bomikhal area here.

Meanwhile The Chief Minister Naveen Patnaik has ordered a high level inquiry to ascertain the cause of the mishap.

Pratap Kishore Panda, owner of Panda Infra Projects engaged in construction of the flyover has been taken into custody, police said today.

On September 10 last year, portions of the under-construction flyover had caved in leaving one person dead and 10 others injured.

A labourer said that iron railings were being installed for a pillar when its support snapped and it collapsed. Some of them got trapped under the railing.

The incident occurred close to the site where a portion of an over bridge had collapsed in September last year, leaving a man dead and ten others injured.

The incident has sparked tension in the area with activists of political parties including the Congress and the BJP staging separate demonstrations.

2018-05-04
Editor in chief
Previous: Naveen Patnaik will review performance of several departments from May 8.
Next: Orientation programme on Youth in order to make the city youth socially smart