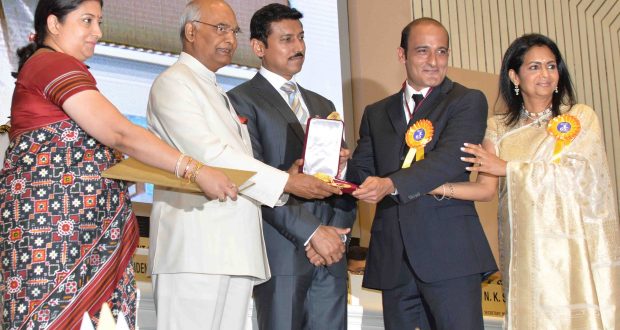 in National May 3, 2018 Comments Off on The 65th National Film Awards ceremony was held at Vigyan Bhawan: almost 68 awardees chose to boycott the ceremony 626 Views

As per reports, almost 68 awardees chose to boycott the ceremony. Over 60 awardees wrote an open letter to the President expressing their disappointment. However, President’s press secretary, Ashok Malik issued a statement that read, “President attends all award functions and convocations for a maximum of one hour. This has been the protocol since he took office. It was conveyed to Information and Broadcasting Ministry several weeks ago and the ministry knew this all along. Rashtrapati Bhavan is surprised by the 11th hour questions that have been raised.”

The ceremony began with Information and Broadcasting Minister Smriti Iraniand Ministry of Youth Affairs and Sports Rajyavardhan Singh Rathore giving out the awards for non-feature films.

After handing out these awards, they proceeded to honour the winners of the feature films section. The jury of the National Film Awards including Shekhar Kapur and Ramesh Sippy were also present at the ceremony. 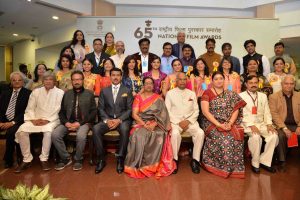 President Ram Nath Kovind then graced the event and handed out 11 awards.

The President first honoured late Vinod Khanna with the Dadasaheb Phalke Award, the highest honour in Indian cinema. His son Akshaye Khanna and wife Kavita Khanna accepted the honour on behalf of the actor.

The President then proceeded to honour awardees like AR Rahman, Nagraj Manjule and Yesudas among others. Sridevi, who posthumously won the Best Actress award for Mom was also honoured by the President. Her husband Boney Kapoor and daughters Jahnvi and Khushi collected her honour from the esteemed panel.President Ram Nath Kovind then addressed the nation. In his speech, he remembered the contribution of late actors Sridevi and Vinod Khanna. He also spoke about the immense contribution that Indian cinema has made in terms of its cultural impact and unifying the nation. He concluded his speech by saying, “May you and may our film industry go from strength to strength. To borrow a line from a film that some of you may remember, “Picture abhi baaki hai” – the best is ahead of us.”

After his address, Smriti Irani took the stage and congratulated the winners for their achievements.

The 65th National Film Awards were boycotted by many as the President did not hand out all the awards and the winners were told about the same after they had reached New Delhi for the event.