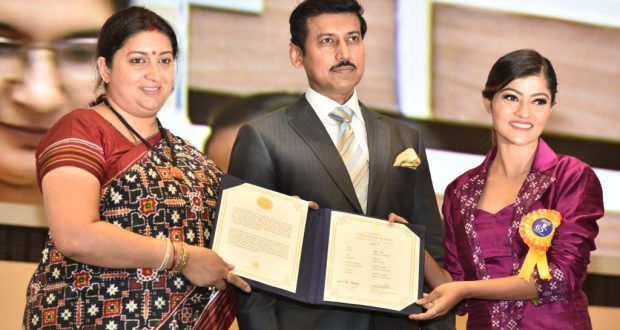 Prakruti was conferred with the coveted award from Union Information and Broadcasting Minister Smriti Irani at the 65th National Film Awards ceremony.

Earlier, More than 60 winners of the National Film Awards today said they would skip the ceremony in the evening after a last-minute announcement that President Ram Nath Kovind would be presenting only 11 awards, a departure from tradition.

The function, being held at Vigyan Bhavan, will be organised in two phases this year, the Press Information Bureau said. The first set of awards will be conferred by Union Information and Broadcasting Minister Smriti Irani and the Minister of State Rajyavardhan Singh Rathore from 4 pm. The second set will be presented by the president from 5.30 pm.

In their open letter, marked to the Office of the President and Ministry of Information and Broadcasting, the artistes said they were informed about the change in the schedule yesterday by Chaitanya Prasad, additional director general of the Directorate of Film Festivals.