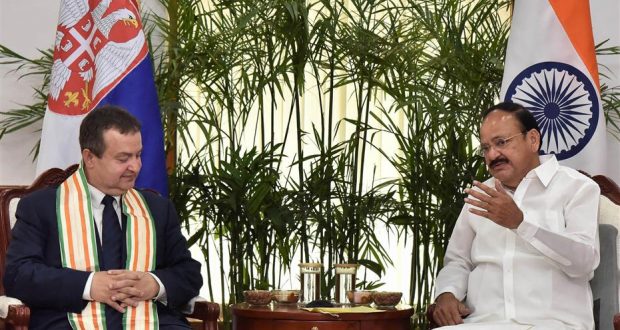 India and Serbia enjoy a special relationship based on mutual trust and understanding: Vice President

in National May 3, 2018 Comments Off on India and Serbia enjoy a special relationship based on mutual trust and understanding: Vice President 738 Views

Newdelhi:3/5/18;The Vice President of India, Shri M. Venkaiah Naidu has said that India and Serbia enjoy a special relationship based on mutual trust and understanding and the pride in historic relationship with Serbia reminding 70 years of diplomatic relations with the country. He was interacting with the Serbian delegation led by the First Deputy Prime Minister and Minister of Foreign Affairs of Serbia, Mr. Ivica Dacic, here today.

The Vice President assured the Serbian Deputy Prime Minister on the Kosovo issue, and said that there is no change in India’s principled stand and does not recognize Unilateral Declaration of Independence (UDI) of Kosovo. India has opposed Kosovo’s application for membership of various international entities including UNESCO, World Custom Organization (WCO), Interpol, etc, he added.

The Vice President said that there is an immense scope to improve bilateral trade with Serbia. Happy to note that the bilateral trade between India and Serbia has increased in recent years and has reached about 200 million US Dollars in 2017, he added.

The Vice President said that India is the fastest growing economy in the world and various economic reforms are being undertaken. Serbian companies can take advantage to participate in Indian economy through B-2-B model, he added.

The Vice President appreciated the popularity of Yoga in Serbia and widespread celebration of International Day of Yoga across Serbia.