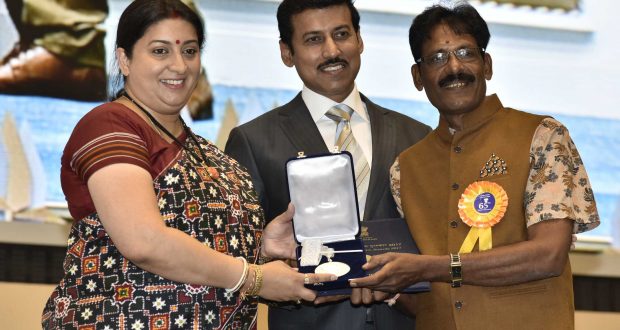 The Union Minister for Textiles and Information & Broadcasting, Smt. Smriti Irani presenting the Rajat Kamal Award to Ajaya Routray (Best Odiya Film) for the Feature film  HELLO ARSI, at the 65th National Film Awards Function, in New Delhi on May 03, 2018. The Minister of State for Youth Affairs and Sports (I/C) and Information & Broadcasting, Col. Rajyavardhan Singh Rathore is also seen.

New Delhi3/5/18:Odia film‘Hello Arsi’ Producer Ajaya Rouray. actress Prakruti Mishra who had received a special mention for her role in Odia film ‘Hello Arsi’, Director of Film Sambit Mohanty  who had also selected for Best Dialouge award,(as the Director was passed away on behalf of him his wife Ritu Pattnaik) received the national award from Union Information and Broadcasting minister Smriti Irani and Minister of State Rajyavardhan Singh Rathore at Vigyan Bhawan in New Delhi on Thursday. 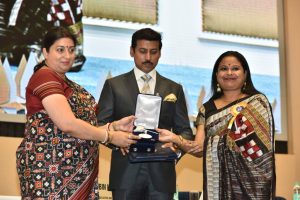 In a departure from tradition,  President Ram Nath Kovind presented only 11 awards while the rest were given away by Irani and Rathore. Expressing displeasure, as many as 65 awardees skipped the ceremony.

The 11 chosen for the President’s segment included actors Vinod Khanna and Sridevi, who have been honoured posthumously, and Oscar winning composer AR Rahman.

The event was organised in two phases – first set of awards were given away by Union Minister Smriti Irani and Minister of State Rajyavardhan Singh Rathore while the second set was presented by the President from 5.30 pm.

2018-05-03
Editor in chief
Previous: Anubhav Mohanty made news when he met with an accident on the sets of PREM KUMAR
Next: President of India Inaugurates the Centenary Celebrations of Christian Medical College