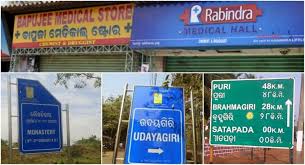 Bhubaneswar: 2/5/18;The State Assembly today passed the much-awaited ‘Odisha Official Language (Amendment) Bill, 2018’ having penal provisions for non-compliance and reward for extensive use of Odia by State government officials in official communication.

“We welcome the Bill (amendment). However, violations and quantum of punishment has not been defined,” said Leader of the Opposition Narasingha Mishra speaking to reporters.

Amendment is just mere eyewash. It would have been better had it been passed after incorporating penal provisions,” said BJP leader Pradip Purohit in his reaction on the Bill.

The House also passed the ‘Odisha Shops and Commercial Establishments (Amendment) Bill, 2018’ making signboards in Odia mandatory for shops and business establishments within the State.

Under the provisions in the Bill all shops and business establishments have to comply with the order within a month of its implementation or pay fines. Penalty for first-time violators will be Rs 1000 subject to a maximum of Rs 5000.

However, for second violation penalty will be Rs 2000 subject to a maximum of Rs 25000.