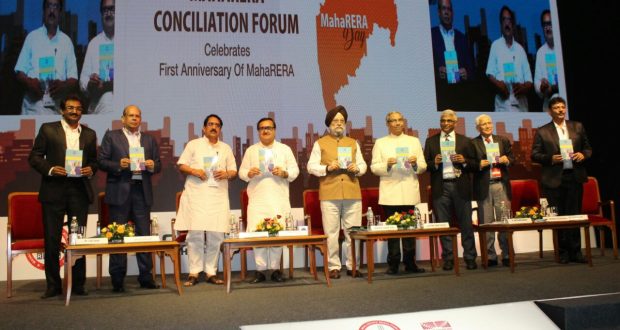 Newdelhi; 1/5/18:Hardeep Singh Puri, Minister of State (Independent Charge) for Housing and Urban Affairs, Government of India present at the ‘MAHARERA Conciliation Forum’ in Mumbai today. Heexpressed his happiness on participation of the 1st Anniversary of MahaRERA which he called as ‘a vision that has come true’. He added that it is reassuring to see representatives of both the consumer & builder forum all gathered in one place, beginning to look at the positive aspects of RERA. People have begun to not only appreciate the virtue & importance of RERA but also realize that you cannot have a situation without it.

The Minister enlisted important things which ‘MahaRERA’ stands for and has initiated to implement them for the betterment of the industry:

On this occasion, the Minister of State Housing & Urban Affairs released a Booklet “Conciliation – A Unique Experiment by MahaRERA” prepared by Mumbai Grahak Panchayat (MGP). The Booklet, among other things, highlights the Procedure & Rules of the Conciliation, how to invoke Conciliation process and also some Success Stories.

Shri Hardeep Singh Puri also added that ‘Swachh Bharat Mission’ is now becoming a ‘Jan-andolan’, as the project of people. Speaking on the ‘Pradhan Mantri Awas Yojana’, the Minister recalled Rural Development Minister’s words that 1 crore rural houses would have been built by December 2018, under PMAY. The Minister said that out of the calculated target to build 11 million houses, 4.5 million houses have already been sanctioned by March 31, 2018. The Minister said that the pace of progress makes him confident of completing the target for housing construction by April 2019, ahead of the target of 2022. He said that ‘Smart City Mission’ is one of the most crucial steps in the direction of planned urbanisation. He added, between now and year 2030, approximately 700 – 900 million sq meters of urban space every year will required to be constructed and urbanrejuvenation will also come through in-situ slum development and redevelopment.

Maharashtra was the first & the only state in India to commence on-line registration of new & ongoing Real Estate projects on the mid-night of 30th April/1stMay 2017. Maharashtra is also the only state in India so far to have the maximum number of Real Estate projects (more than 16,000) registered. In last nine months, MahaRERA has disposed off 1168 complaints. Out of 90 Appeals, 45 Appeals have already been disposed of.