Top Headlines
Home » National » In future, all courses must be taught in their local languages:Vice-President 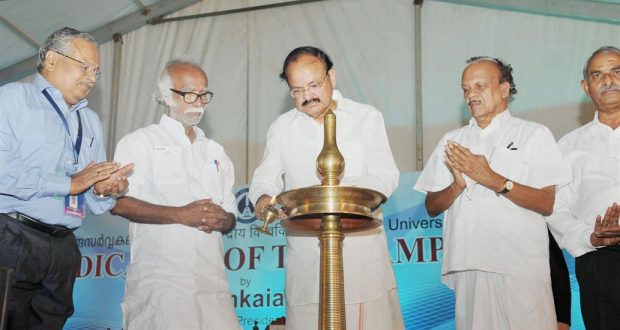 In future, all courses must be taught in their local languages:Vice-President

in National April 29, 2018 Comments Off on In future, all courses must be taught in their local languages:Vice-President 1,564 Views

Kerala:29/4/18:The Vice President of India, Shri M. Venkaiah Naidu has said that India has the chance to re-emerge as the global powerhouse in the field of education and called for revamping the syllabi and improving the infrastructure to impart world class quality education.

He was addressing the gathering after inaugurating the new campus of the Central University of Kerala and dedicating the educational institution to the nation, in Kasargod, Kerala today. He said that India was once known as ‘Vishwaguru’ and people from across the globe used to come here to study and acquire knowledge and expertise in different domains.

The Vice President said that from private educational institutions to Central Universities like this, every academic organization must work in a mission mode to revamp the educational architecture in tune with the requirements of the 21st century to make India a leading nation in the field of education and innovation.

He said the education system should aim at the creation of a new, inclusive society, non-violent and non-exploitative, consisting of highly cultivated and motivated individuals inspired by love for humanity and guided by wisdom. He asked the students to be the torch bearers of our culture, traditions, ethos and customs. There is nothing wrong in adopting and assimilating good practices from elsewhere, but always remain rooted to our age-old culture and heritage, he added.

The Vice President recollected the famous words of the Father of the Nation – “I do not want my house to be walled in on all sides and my windows to be stuffed. I want the culture of all lands to be blown about my house as freely as possible. But I refuse to be blown off my feet by any”.

The Vice President said that Education must lay the foundation for the progress of a nation adding that higher education, in particular, has an important role in building a knowledge-based society of the 21st century. He further said that higher education system should expand qualitatively and quantitatively for the betterment of the nation and society.  Graduates need to be competitive not only in a local or national context, but in an increasingly global market, he added.

The Vice President said that in this ‘global village’ our graduates as future leaders need a new kind of intercultural understanding, respect for common rules and fair play, an understanding of different interests, views and ways of thinking, and the ability to analyze and synthesize, he added.

The Vice President expressed the hope that in future various courses, including science & technology, will be taught in respective local languages in various States.