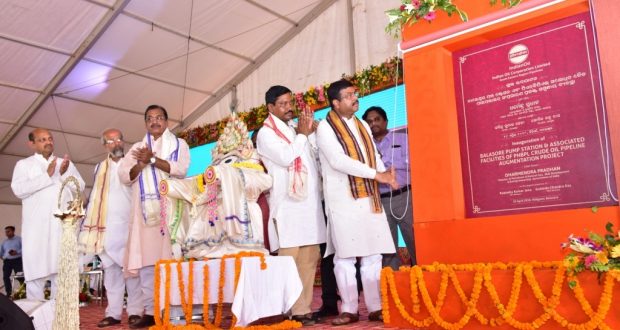 Inaugurating the event the Union Minister said, “The PHBPL Pipeline is acting as the energy highway to entire Eastern & North-Eastern region of India supplying crude oil to 5 refineries namely Paradip, Haldia, Barauni, Bongaigaon & Guwahati. Also in future it is envisaged to feed crude oil to Numaligarh refinery in the NE Region. This crude pipe line will reduce the positioning cost of crude at the above said upcountry refineries by about Rs 300-400 crore per Annum.”

Paradip is having one of the biggest crude oil storage facilities having 31 number of crude oil storage tanks of capacity of 60,000 kiloliters each. This will ensure uninterrupted supply of Crude Oil to all Eastern Region Refineries of IOCL. This newly constructed Balasore Pump Station with all State of Art facilities will play a key role in feeding all those refineries.

For augmentation of PHBPL, IOC has invested Rs. 586 crores project for four states (Odisha, West Bengal, Jharkhand & Bihar), out of which Rs. 321 crore has been invested in Odisha only.