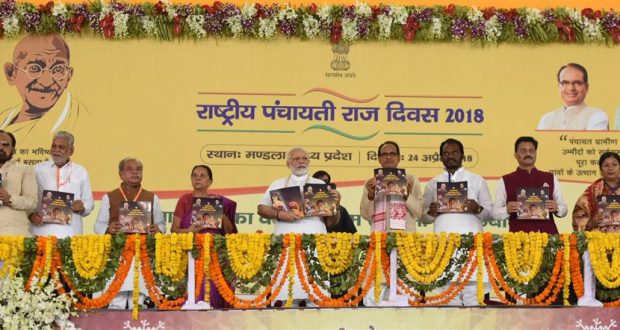 Newdelhi:24/4/18;Prime Minister Narendra Modi launched the Rashtriya Gram Swaraj Abhiyan today, at a public meeting, in Mandla in Madhya Pradesh. He unveiled a Road Map for overall development of tribals during the next five years.

He laid the foundation stone of an LPG bottling plant of Indian Oil Corporation at Maneri, Mandla District. He also launched a Local Government Directory.

The Prime Minister felicitated the Sarpanches of villages which have achieved 100 percent smokeless kitchens, 100 percent vaccination under Mission Indradhanush, and 100 percent electrification under Saubhagya Scheme.

Addressing Panchayati Raj representatives across the country, from Mandla, the Prime Minister recalled Mahatma Gandhi’s call for Gramoday to Rashtroday, and Gram Swaraj. He said he is delighted to be in Madhya Pradesh on National Panchayati Raj Day. He added that Mahatma Gandhi always highlighted the importance of villages and spoke about ‘Gram Swaraj’. He called upon everyone to reaffirm the commitment to serving our villages.

The Prime Minister said that while talking about rural development, budgets are important. But, he added, there is a shift in the discourse in the last few years. People are now talking about the need to ensure that money allocated for a project is utilised and it is done in a timely as well as transparent manner, he said. 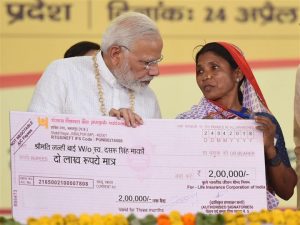 He urged people to focus on the education of their children, and added that this is essential for the child’s future.

The Prime Minister underscored the efforts towards self-reliance in the agriculture sector. He urged the Panchayat representatives to pay attention to water conservation, and to ensure that every drop of water is conserved.

The Prime Minister also said that the recent steps taken by the Union Government will be beneficial in furthering the safety of women.

2018-04-24
Editor in chief
Previous: There is no leader but Lord Jagannath is the only leader in Odisha:Niranjan Patnaik
Next: Letters of Intent awarded today by Tourism Minister to 9 agencies for 22 monuments under Adopt a Heritage project